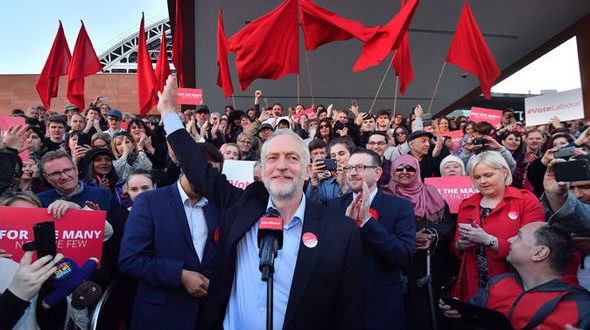 Build a mass movement to win- Organise to fight for socialism

December’s general election has the potential to mark an historic turning point. It is an opportunity to build a mass movement to demand a society that works for the millions. It’s a chance to kick out the Tories and put Jeremy Corbyn in number ten.

Corbyn can win this election. To do so he must speak directly to working class and young people with a clear programme that can transform lives. When Corbyn launched his election campaign he strikingly called for ‘real change’. The real change we need is socialist change.

Austerity must end. Ten years of Tory brutality have left us with foodbank Britain. Nearly four million children live in poverty. Workers have endured a decade of wage restraint. Young people face debt-burdened lives and a housing crisis. Struggles with poor mental health blight every generation: the symptoms of a sick society.

Meanwhile the NHS is being sold off – bit by bit – to the highest bidder. And climate breakdown threatens the very future of our planet.

Yet our society is awash with vast wealth. Wealth that is overwhelmingly concentrated in the hands of a tiny rich elite. It’s this rich few – the capitalist class – who own and control the huge monopolies that dominate our economy, and by extension the lives of millions. They barely pay tax. They pollute the earth. And now they’re making a killing as the Tories carve up and privatise our public services.

Their class is currently well represented in parliament. Their advocates occupy not just the Tory benches. Many of their most reliable representatives where yellow rosettes. And still more sit behind Corbyn on Labour’s benches, working patiently and persistently to undermine him, to hem him in, and ultimately to force him out.

This election is a chance to deal an almighty blow to the capitalist class who are the beneficiaries of our rigged economy. It’s their power that must be challenged. It’s their system – capitalism – that is damaging the earth, driving down wages, generating and perpetuating oppression on the basis of race, gender, sexuality and more.

Boris Johnson – the Eton educated multimillionaire – laughably wants us to believe that he’s an anti-establishment figure. He claims to represent the people in a contest that’s all about ‘people versus parliament’. But what does this Tory toff know of life under austerity?

The best antidote to these lies is not any defence of a parliament stuffed to the gills with privileged, pro-capitalist politicians. Instead Corbyn must make this a ‘people versus the 0.1%’ election. He must mobilise the working class, along with the youth, to fight for an alternative to austerity and hardship.

In doing so, Corbyn faces the task of advancing a programme that can unite working-class people across the Leave-Remain divide. The months of parliamentary wrangling and game-playing over Brexit have rightly repulsed ordinary people. Most understand instinctively that this has primarily been about two wings of a privileged elite squabbling over which trading arrangements are most favourable to big business.

The voice of workers has been notably absent. But Corbyn has the opportunity to cut across this. He needs to boldly assert that this election is not another Brexit referendum. It ought to be a referendum on austerity – on ten years of cruel and disastrous Tory rule. And what’s more, he needs to connect his anti-austerity programme with a pro-working-class, internationalist and firmly anti-racist approach to the question of leaving the EU.

He should be clear that a Labour government would lay down as red lines in reopened EU negotiations the interests of workers. That he would refuse to agree to any of the myriad of anti-working class, neoliberal treaties currently institutionalised by the EU. These are treaties that can be used to undermine workers and generate a race to the bottom. They include the posted workers’ directive, restrictions on state aid and competition laws which present barriers – that a workers’ government would have to defy – to renationalisation of privatised public services.

What’s more, Corbyn should outline a position that is internationalist. This must be a position that rejects the vile cruelty that sees migrant workers perish in the back of lorries. The real alternative to the current EU bosses’ club is not some Little Englander fantasy. It’s a Europe for workers – a socialist Europe. We live on a continent which has spent the last decade aflame with mass protest and struggle against austerity. A government in Britain implementing an anti-austerity programme, appealing to the masses of Europe to support it, could be the catalyst for revolt and uprising that could sweep through the continent.

So Corbyn has work to do. But this election must not be simply about him as an individual. Because whatever the outcome on 12 December we know the fight will not be over then. Should Corbyn win, he will immediately face the wrath of a capitalist class intent on protecting its profits and defending its privilege. And if Corbyn is relying only on parliament to defend him against such forces he will find himself exceptionally vulnerable.

History is not just made in the halls of Westminster. Working-class people have huge potential power. After all, it’s workers who turn the world’s resources into goods people can use, who distribute goods across the planet, who provide all the services that keep society running. So, when we act collectively, we have the power to be actors in history – to be the agents of transformation.

We need to use this election to build a movement that can outlast this campaign. 2017 gave a glimpse of what’s possible. We need mass rallies in towns and cities across the country. Mass canvasses should also be organised.

It’s tremendously positive that workers in Royal Mail, in universities and in a whole series of important local disputes could be on strike during this campaign. It’s vital that there is no attempt made to call such action off. In fact, trade unions should be at the heart of building this movement. These disputes could be central focuses during the campaign, increasing the confidence of workers across Britain, highlighting important demands. It is particularly positive that, at a time when postal workers are facing down a brutal boss, Corbyn has pledged to renationalise mail, along with rail and water, in opening his election campaign.

Ultimately, we need to build a mass movement that can push Corbyn to go further than even his current, positive programme outlines. History warns us that the capitalist class will stop at nothing to protect their wealth and power. Economic sabotage – threats of moving jobs out of the country, capital flight, and more – would be the likely response to plans for large-scale renationalisation.

Corbyn would need to take measures to protect working-class people against its effects. That would require a preparedness to take measures that point beyond capitalist constraints. It would mean nationalising the banks – taking control of the flow of capital. It would mean being prepared to challenge the most important power that the capitalist class possesses – their control over the economy. Doing so would require going beyond the renationalisation of a few privatised services, and taking into public ownership – under democratic working-class control and management – the big monopolies that currently dominate our economy. Compensation could be paid to shareholders only on the basis of need.

In the end, all this would need Corbyn to rely for power and authority not on parliament, but on an organised, mobilised and conscious working class, democratically participating in pointing the way forward, and capable of controlling its own destiny.

Corbyn raised in his opening campaign speech the need for a Green Industrial Revolution. The crisis facing our planet means there is no time for us to lose. Corbyn must take heed of the slogan that has become synonymous with the mass school student climate strikes: we need system change. That means we need an end to this disastrous capitalist system that is based fundamentally on the exploitation of people and planet, and its replacement with a socialist society for the millions.

Socialist Alternative will be taking part in this election campaign to assist in fighting for a Corbyn-led government. But we won’t stop there. We will be organising to help build a movement that can fight for the socialist change our society needs so desperately. It’s a movement that will need to continue beyond the 12 December – whoever occupies Downing Street. We hope you will join us.