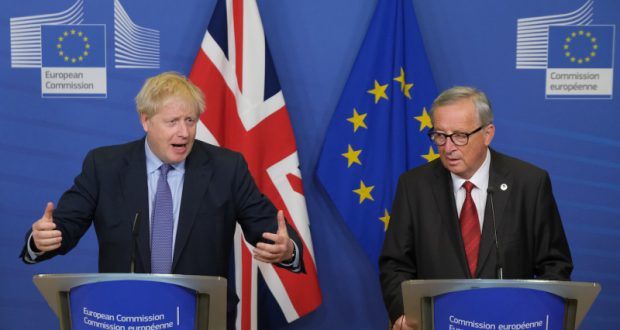 Brexit: Johnson deal threatens division and race to the bottom

The seemingly intractable problem of Brexit continues. After MPs rejected Boris Johnson’s plans to rush his deal with the EU through in three days, a further extension requested by Parliament against the wishes of the government was granted. Now, voters are set to go to the polls on 12th December after Jeremy Corbyn’s Labour backed the call, assured that a ‘no deal’ Brexit is effectively off the table.

It is no wonder that many people are fed up with this saga. Nonetheless, Johnson’s plan for a ‘bargain basement’ Brexit has important implications for workers, particularly in Northern Ireland, and should be opposed.

For socialists, Brexit is symptomatic of a broader crisis for capitalism globally. This is reflected in the escalation of a trade war between the US and China, the two largest capitalist powers in the world, alongside elements of a process of “de-globalisation”, with the emergence of protectionism and inter-imperialist rivalry more generally. Politically, it also reflects a crisis of the “extreme centre”, the neo-liberal consensus of cuts, privatisation and an unfettered ‘free market’ which has dominated for decades. This has resulted in the rise of left-wing, reformist leaders like Corbyn and Sanders, but also right-populists like Johnson and Trump.

No race to the bottom

There are two main differences between Johnson’s deal and that negotiated by Theresa May. It removes legally binding commitments to ensure workers’ rights and environmental standards are aligned with the EU in order to provide a ‘level playing field’. This is aimed at winning over the Tory hard right, who dream of a “Singapore-on-Thames” and  plan to recast Britain as a low-tax and low-regulation economy.

Despite assurances from Johnson, in order to gain support from some Labour MPs, these issues will ultimately be dealt with in future trade negotiations – not just between the EU and UK, but also between the UK and US. The Trump administration has already set out its stall for such negotiations, including the removal of food standards which block the import of chlorine-washed chicken, hormone-pumped beef and so on. A future trade deal could also threaten the cherry-picking of the NHS for privatisation, similar to the defeated EU-US free trade agreement TTIP, as well as increases in the cost of medicines by US pharmaceutical giants.

At the same time, the Johnson-EU deal includes a commitment that, “The Parties should in particular maintain a robust and comprehensive framework for competition and state aid control that prevents undue distortion of trade and competition.” In other words, the British government would still be bound by EU rules which block socialist measures such as nationalisation, despite no longer being in the single market. This, in part, is to mark the cards of a potential Corbyn government, creating barriers to implementing popular measures like bringing the railways and other sectors of the economy into public ownership.

The second related change is the removal of May’s proposed ‘Irish backstop’. The new arrangement would mean that Northern Ireland will leave the customs union with Britain but will remain closely aligned to the single market regulations. There would be customs checks on goods travelling between Britain and Northern Ireland, and potentially regulatory checks as Britain diverges from EU standards. This would effectively mean a hardening of an east-west border.

Stormont – if functioning – would have a say on how long alignment to the single market would last, but the mechanism would be very different from the “time-limited backstop” the DUP were prepared to accept. If a majority of MLAs designated as Unionist and nationalist both vote in favour, then the next vote would take place in eight years. If it is passed by a simple majority, then the next vote would take place in four years. This is an important shift in how contentious issues are dealt with at Stormont, and would effectively mean that the question of whether there should be a harder border between North and South or between Britain and Northern Ireland will be a looming issue to be regularly returned to.

This deal only adds to the legitimate feeling of insecurity felt about the future by many ordinary Protestants. If there is a perception over time that their identity and the integrity of the Union is being further diminished and that Northern Ireland is being forced into an “economic united ireland”, it could provoke a serious reaction, as we have seen in the past. A very large recent public meeting involving prominent figures associated with  loyalist paramilitaries heard talk of protests against this “betrayal” gives an indication that protests similar to those against the removal of the Union flag from Belfast City Hall are possible.

This is not simply a question of the attitudes of the DUP or other Unionist/loyalist organisations, but the concerns and fears of working-class Protestants. This is reflected in a recent LucidTalk poll, which showed that 53% of Unionists would prefer a ‘no deal’ Brexit over Johnson’s agreement, while only a third said they preferred the deal. Similarly, in a choice between remaining in the EU and Johnson’s deal, 43% chose to remain while 37% opted for the deal. Meanwhile, Sinn Féin have welcomed the deal as a “halfway house”, as have representatives of other pro-remain parties.

Socialists have a responsibility to oppose any measure which would heighten sectarianism in Northern Ireland. That includes any hardening of borders, be it east/west – as with Johnson’s deal – or north/south, which would not be tolerated, particularly by Catholics who would see it as copper-fastening partition. As the Socialist Party has consistently argued throughout the Brexit negotiations, the trade union movement – which unites almost 250,000 workers in Northern Ireland, from across the sectarian divide – must be prepared to take action against any moves which will inflame tensions.

The General Secretary of the Irish Congress of Trade Unions (ICTU), Patricia King, said Brexit was an emergency situation facing workers, North and South. We agree. It is clear that capitalist governments and employers will attempt to use Brexit as an excuse to attack workers’ jobs, pay and conditions. Unfortunately, the response of the ICTU leadership to date has been limited to demands like calling for the use of the European Globalisation Adjustment Fund to assist workers who lose their jobs in the context of Brexit. This is entirely insufficient. The movement must prepare for a fight to defend jobs and conditions. The recent struggles of the Harland & Wolff and Wrightbus workers show what is needed: militant trade unionism.  These workers also raised an essential demand to safeguard jobs in the long run – nationalisation.

This agreement – like any which could be negotiated between the Tories and the EU – is a deal between two capitalist blocs and is not in the interests of working-class people. Socialists and the labour movement must reject the false choice between a Tory-led Brexit – with or without a deal – or remaining in the institutionally neo-liberal EU. The Labour Party conference’s rejection of a hard ‘remain’ position is a partial defeat for the Blairites, who represent the interests of British capitalism and who seek to use confusion around Brexit to undermine Corbyn. The leadership’s resolution, which passed, is for a Labour government to re-negotiate a deal with the EU and then put it to a confirmatory referendum with the option of remaining in the EU on the ballot paper.

With a general election looming, Corbyn must put forward a clear programme which can speak to working-class voters, whether they backed ‘leave’ or ‘remain’ in 2016. Against the right-wing populism of Boris Johnson – who will attempt to present himself as the defender of the people against an out-of-touch Parliament and committed to “getting Brexit done” – a combative, socialist message is more necessary than ever. Corbyn should articulate and campaign for a socialist exit from the EU which would free a future government under his leadership from the restrictions on nationalisation, public spending and state intervention into the economy – which would act as a barrier to his policies – while guaranteeing workers’ rights, migrants’ rights, environmental safeguards and so on. Combined with demands for free education, reducing the working week, massive investment in social housing and renewable energy, democratic public ownership of key sectors of the economy and other pro-working class measures, it is possible for him to secure a majority in Parliament.

To actually implement these policies in the face of the opposition of the capitalist establishment, Corbyn would have to mobilise the British working class and make an appeal to workers and young people across Europe. He would also have to finish the civil war within Labour and decisively drive out the Blairites, who seek to undermine his leadership and block his policies at every turn. Corbyn and those around him have sought conciliation with the right for too long, and it has increased the confidence of their implacable enemies. Corbyn supporters within Labour should immediately move to unseat sitting Blairite MPs through trigger ballots, allowing the membership to democratically replace them with working-class fighters for socialist policies.

In Northern Ireland, working-class people will once again be faced with a sectarian headcount. General elections, given the close margins in some constituencies, can particularly take on this character. The Brexit crisis and the current deal will significantly add to that. ‘Unity’ candidates – whether openly in a communal guise or in a disguised form around Brexit – would not provide any solutions but will further sectarianise the election.

This underlines the urgent need to build an anti-sectarian, working-class alternative that can seek to unite people around our common interests. The recent and ongoing industrial disputes here clearly demonstrate that workers have no friends among the main parties, whether Orange, Green or neither. Similarly, the battle for abortion rights and marriage equality was only won through struggle which forced the main parties, some times kicking and screaming, to shift their positions. A mass working-class party could not only take up the issues that clearly unite working-class and young people, but also find solutions to those that divides us, on the basis of mutual respect and solidarity, rather than through conflict and coercion, which is all any capitalist arrangement can offer.

Capitalism today means crises – economic, political and environmental. It’s a system destroying our planet, undermining our living standards and creating the basis for the emergence of reactionary, bigoted figures such as Johnson, Trump and Bolsonaro. The capitalist governments of Europe and the EU, who represent this system, are part of the problem, not the solution.

We need to break with this system, which pits worker against worker, and fight for socialist change. This requires a break with the bosses’ EU, where cooperation between the ruling classes is based on maximising profit at the expense of the working class. Instead, we need to fight for a socialist confederation of Europe – free, voluntary and equal – based on solidarity and cooperation between workers across the continent, using society’s wealth and resources in a planned and democratic way to raise living standards and tackle climate change.