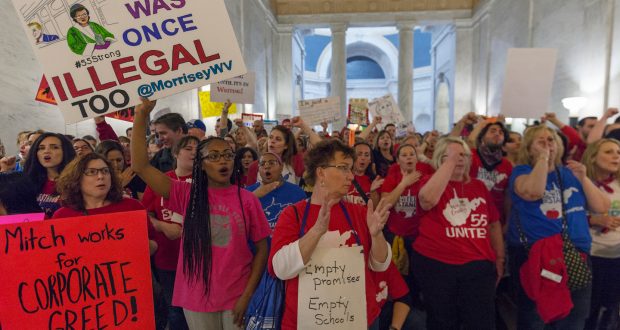 The powerful resurgence of US labour movement

The resurgence of a powerful US labour movement, with a militant-rank-and file its engine, shows no sign of abating in 2019. This is after a historic 2018. in which a total of 485,000 workers went on strike, more than in any year since 1986. 2018 figures contrasted dramatically with 2017, in which only 25,000 went out on strike, lower than any year on record other than 2009, the height of the economic crash.

The workers’ movement upsurge began in the “Red State” of West Virginia in February 2018. Sick of their poverty wages and systematic undermining of public education by Republicans and Democrats alike, this revolt of teachers that included wildcat unofficial strike action and which scored a victory, began precisely where union structures and officialdom was weak, allowing a rank-and-file takeover that was the root of its militancy and victories.

Erin Brightwell of this paper’s US sister organisation, Socialist Alternative, writes that: “After decades of decline in the power of unions, the teachers and school support workers of West Virginia boldly staged a statewide, illegal strike, shutting down the entire public K-12 [Pre-School to Secondary Education. Editor.] education system for eight days and winning a wage increase for themselves and all public sector workers as well as defeating various threatened attacks. The educators’ rebellion that began in West Virginia then led to eruptions in a number of other states, both “red” and “blue,” including Oklahoma, Arizona, Kentucky, North Carolina, South Carolina, Colorado, Washington State, Oregon, and California. It has also had an impact on how workers in other industries view going on strike.”

With 35,000 Chicago public schools teachers and staff set to strike from 17 October 2019, a new battle line for the teachers’ revolt will open up.

From McDonald’s to General Motors

The revitalising of the US trade union movement has spread to hospitality, from the #MeToo inspired McDonald’s strikes, to a strike of hotel workers at the Marriott hotel chain, involving nearly 8,000 workers; to retail, for example the Stop and Shop strike in New England earlier this year involving 31,000 shop workers; to tech, including the first moves towards Google workers unionising; and now to heavy industry, with 50,000 auto workers in the United Auto Workers (UAW) on strike against General Motors (GM) in a seminal and strategic dispute that at the time of writing has involved an all-out stoppage for three weeks solid.

“When the GM contract came up in 1982 the UAW leadership had already accepted the logic of concessions to preserve corporate viability, and therefore (so they believed) their members’ jobs. That contract saw the first acceptance of a lower pay scale for new hires.

“This strategy has never worked. The record shows that since that moment, GM has gone from 440,000 unionized employees in the U.S. to the present figure of just under 50,000. In 2018 GM reported $10.8 billion in U.S. profits but announced the shutting down of five North American plants.”

Decades of attacks on workers’ wages and conditions, the ravages of privatised healthcare, and a major drive to further privatise education are the unbearable conditions pushing US workers into action. The radicalisation present in US society in the decade since the Great Recession has been represented in bursts of social movements, from the 1% vs the 99% of Occupy, to #BLM and anti-Trump women’s movement.

It was especially seen in the class demands evident in Bernie Sanders’ previous Democratic primary challenge, that called for a political revolution against the billionaire class. This campaign mobilised and inspired millions of workers and youth, including a huge popularising of socialist ideas, acting as a forerunner of labour’s upsurge, as it’s fuelled by a backbone of a new generation of politicised worker-activists.

It’s worth noting that included in strike figures for 2018 and 2019 are battles that specifically target racism and sexism in a whole range of disputes, including action by furniture workers demonstrating against the barbaric treatment of refugees by the state.

The multi-racial and all-gendered working-class of the US has emerged as a powerful arbiter of solidarity and progress in the teeth of reaction under Trump, and its continued industrial and political organisation is vital for the working class and oppressed everywhere. Its force organised around the ideas of socialism can end the rule of capitalism in the “belly of the beast”.