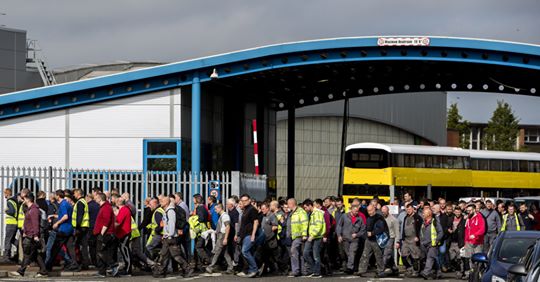 Nationalise Wrightbus to save jobs

The Socialist Party sends solidarity to the 1,200 Wrightbus workers faced with redundancy since the firm went into administration on 25th September. Staff were informed that talks with potential buyers had fallen through and that almost all of them were to be made jobless with immediate effect due to cash flow issues. Private security was used to ensure the workers left the site, with management clearly fearing the potential for an occupation like that at Harland & Wolff, where nine weeks of action by the workers stopped the yard simply going to the wall and created the space for another buyer to step in.

Another blow for Ballymena

If the jobs at Wrightbus are lost, it will be the latest in a series of major blows to manufacturing in the Ballymena area in recent years, following the closures of JTI Gallaher, Michelin and other firms. These job losses first and foremost impact the workers and their families, but they have a broader impact across the local economy, through supply chains and decreased spending power. Crucially, they deprive young people of the opportunity to learn a skilled trade, leading to a decent job. Poverty pay and precarious conditions in retail, hospitality and other service industries are what face most young people here when they leave education.

Rightly, there is anger at the fact the Wright family ‘donated’ £15 million from the firm to their Green Pastures Church in recent years. This shows both incompetence and a cynical disregard for the livelihoods of Wrightbus staff. Workers held a protest outside the church this Sunday and have called for the family to hand over the land on which the site stands in order to help secure a future for the plant.

Once again, the political establishment have shown they have nothing but empty words to offer workers facing redundancy. Local MP Ian Paisley Jnr seems to spend most of his time either taking dodgy holidays or wringing his hands about local job losses, but he has nothing meaningful to say. Like all the main parties, the DUP embrace the logic of the capitalist market, with short-term profit as its be-all and end-all. Boris Johnson previously talked about Wrightbus and Harland & Wolff being part of a “big industrial agenda” for Northern Ireland, yet his government also said that the future of the shipyard ultimately rested on “a commercial decision.”

What is needed is immediate nationalisation of Wrightbus to safeguard the jobs and skills for the future. That is not a fantasy demand. The Scottish government, under pressure, recently stepped in to nationalise the Ferguson Marine shipyard on the Clyde. If it can happen there, why not in Ballymena? Nationalisation was correctly raised by the Harland & Wolff workers and their unions and has also been raised by Unite with regard to Wrightbus.

The workers at both Wrightbus and Harland & Wolff have skills that can contribute to tackling the most pressing crisis facing humanity today – climate change. Harland & Wolff workers have expertise in producing at-sea wind turbines, while Wrightbus workers can produce electric and hydrogen-fuelled vehicles for public transport. That these workers are instead threatened with being thrown on the scrapheap underlines the dysfunctional, short-sighted nature of the capitalist system.

We need a socialist industrial strategy

The whole trade union movement should mobilise for urgent action to secure these jobs, demanding immediate moves to bring the firm into public ownership, not as a temporary measure so it can be handed off to another capitalist owner when it becomes profitable again, but for the long-term and under the democratic control and management of those who know best how to run the firm – the workers themselves. It should be integrated into a socialist industrial strategy, with major investment into producing socially necessary goods and infrastructure – particularly aimed at tackling climate change through renewable energy and free, high-quality public transport – while providing secure jobs with living wages and full trade union rights, as well as apprenticeships for young people.