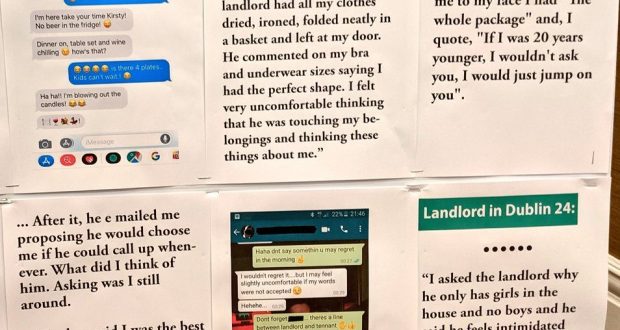 Exploitation has always been part and parcel of the private rented sector, including sexual exploitation. With the escalating housing crisis, the balance of power has dramatically shifted even more to landlords. But until recently‘sex for rent’ had only been anecdotal and not publicly brought out in Ireland.

In September, Socialist Party members were approached by a young woman whose friends we had assisted in a previous eviction situation. She had been propositioned by her landlord,  offering discounted or free rent for sex.

What was unusual about this sexual harassment by a landlord against a tenant was there were WhatsApp messages to back it up. These messages graphically illustrate the power landlords can now use and abuse against a backdrop of record high rents and record low number of rental properties.

‘Laura’ wanted to highlight this to prevent other women or vulnerable tenants going through the same. We agreed a strategy to raise it in the Dáil and media.

In the Dáil, we made the point that no research exists in Ireland on the extent of sexual harassment by landlords. In England, research by Shelter found  250,000 women had experienced this. In the 25-34 age group, 13% of tenants said they had faced this in the last five years. There is no reason to think Ireland is different — or likely worse, given the acute nature of the housing and rent crisis.

Massive publicity followed putting a spotlight on unwanted sexual attention in the rental sector. And with it, more women disclosed to us.

Those in HAP most vulnerable

A particular pattern emerged in the HAP (Housing Assistant Payment) sector. Tenants — mainly women with young children — who face insecurity and homelessness are, of their nature, more prey to landlords and letting agents as HAP properties are more difficult to secure.

One woman, Kirsty, spoke about her experience with a letting agent who prioritised her for the property, then quickly began sending dinner invites, complimenting her and frequently dropping in. His demeanour drastically altered when she challenged him on a maintenance issue and when her HAP payment was delayed. He issued a Notice to Quit.

Other HAP tenants told us of landlords commenting on their appearance, discouraging boyfriends and sending suggestive messages.

In all cases, female tenants tolerated it so as not to risk offending them and being denied the property.

Following the revelations, the Minister for Housing held a meeting with Mick Barry TD and myself. We called for research to be done and the department is to come back about this. We pointed to the dangers of HAP as the main form of social housing, rather than mass public home-building, and argued that HAP properties should be allocated by councils not private landlords. We also demanded real rent controls and the passage of Solidarity’s Anti-Evictions Bill which would give tenants security and remove the easy threat of eviction landlords now have.

But of course the root of this is the failure of the state to provide social and affordable housing. This creates a perfect storm for predatory landlords. The housing crisis can be resolved if vast vacant public land banks are utilised to build thousands of social and affordable homes. Working-class people should not have to rely on profiteering landlords for accommodation. Only then can these power dynamics between landlord and tenant be ended.