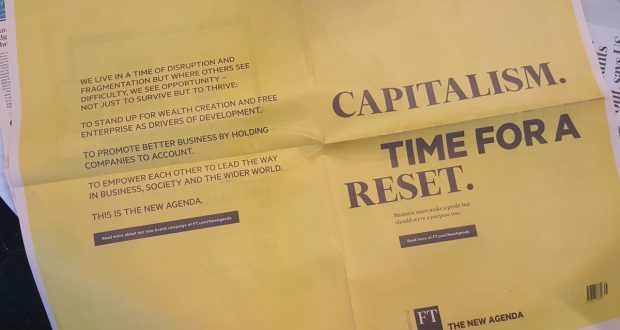 “We need a dynamic capitalist economy that gives everybody a justified belief that they can share in the benefits. What we increasingly seem to have instead is an unstable rentier capitalism, weakened competition, feeble productivity growth, high inequality and, not coincidentally, an increasingly degraded democracy. Fixing this is a challenge for us all, but especially for those who run the world’s most important businesses. The way our economic and political systems work must change, or they will perish.”

This is how commentator Martin Wolff concluded his piece in the Financial Times, entitled “Why rigged capitalism is damaging liberal democracy”. Increasingly, capitalist commentators and ideologues are drawing the conclusion that the legitimacy, and even the existence, of their system is under serious threat, and that it must be “reset” if it is to survive.

The neoliberal economic model which has dominated for decades – a response to a crisis of profitability in the 1970s – has promoted a race to the bottom in wages and conditions, deregulation of the labour and financial markets, privatisation and attacks on public services and social security, and the dominance of unproductive finance capital. This sowed the seeds of the 2008 financial crisis and the Great Recession, following which workers were again made to pay the price through harsh austerity. None of the causes of that crisis have been resolved, and economists are warning of the overwhelming likelihood of another downturn.

The events of the last decade have increasingly hollowed out the authority of the “political centre”, the representatives of neoliberalism, resulting in profound political instability. This has been reflected in the crisis British capitalism faces around Brexit, and in the rise of right-wing populist figures like Trump, and Bolsonaro. But it has also led to developments on the left, with the rebirth of industrial struggle and growing openness to socialist ideas in many countries, the rise of reformist figures like Sanders and Corbyn, and the emergence of global movements against sexism, climate change and so on, with many active in these movements drawing anti-capitalist conclusions. This is what troubles capitalist strategists like Wolff.

Acting in the interests of all

Reflecting this concern for the future of their system, the US Business Roundtable has, for the first time in its history, issued a statement which has redefined the primary purpose of a corporation from serving its shareholders to serving “all of our stakeholders” – ie, workers, communities, etc. They envisage a capitalism with a human face, acting in the common interests of all.

Of course, the emptiness of these words becomes clear when you consider that one of the 181 CEOs who signed this statement is Jeff Bezos, Amazon owner and richest man in the world. Bezos has viciously resisted attempts by Amazon staff to organise against poverty pay and Dickensian working conditions. He is currently bankrolling efforts to unseat Seattle City Councillor Kshama Sawant – a member of Socialist Alternative, our US co-thinkers – because she has campaigned for a tax on major corporations in the City to help fund social housing and homeless services.

Capitalism is structurally incapable of functioning on any basis except that of maximising profit. Any capitalist who tries to defy this reality will not remain a capitalist very long. The inequality and dysfunctionality which commentators like Wolff bemoan are a natural by-product of the system working as it must. Similarly, while individual capitalists may be concerned about climate change, they cannot overcome their myopic and chaotic system’s inability to act in the urgent, coordinated way necessary to deal with the crisis. For example, Barack Obama accepted that man-made climate change was a reality, but he still promoted the fracking industry, because the interests of big business and US imperialism demanded it.

Capitalism is a parasitic system which has nothing to offer but poverty, inequality, war, bigotry and destruction of our environment. As James Connolly said, “The day has passed for patching up the capitalist system; it must go.” Because of its role in production, the working class is the force with the collective power to strike at the heart of capitalism. We need to build fighting, democratic trade unions and a political voice for the working-class, with a socialist programme aimed at taking society’s wealth and resources into democratic public ownership, so they can be used to meet the needs of people and planet, not create profit for a tiny elite.