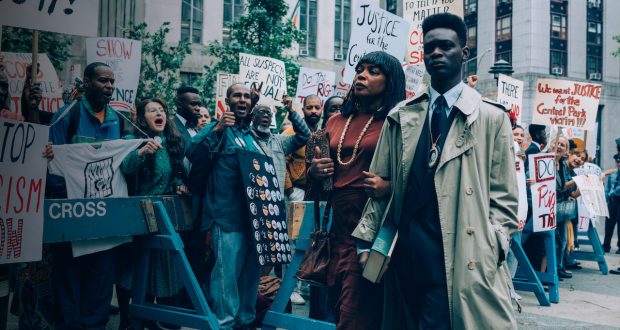 In the spring of 1989, a scandal gripped New York: the case of the “Central Park Five.” After the brutal rape of a female jogger in Central Park, five black and Latino teenagers from working-class Harlem were arrested and forced into false confessions by police that promised this would guarantee their freedom. This was, of course, far from the truth. In the end, the five boys served sentences between five and fourteen years for a crime they didn’t commit.

“When They See Us” is a four-part drama series released by Netflix which revisits this case, and aims to shine a light on the racial bias of the city’s police force, the unjust “justice” system, and the prejudice of New York’s capitalist establishment. The title itself, “when they see us”, sets a theme that will run throughout. “They” is the police force, the media, the justice system – these are set against, “us”, the five teenagers, who will be convicted for a crime where no evidence was provided, based off of discrimination and racism.

Despite the fact that this happened over 30 years ago, the themes don’t feel so distant. The racial discrimination of the police, the animalistic language used when talking about the teenagers, the fear of both the children and their parents in dealing with a justice system they know only to fear, is upsetting but also calls to mind that these aren’t things of the past. The names Trayvon Martin, Cyntoia Brown, and Kelly Williams-Bolar circled my mind as I watched each of the teenagers experience the unforgiving racism of the police. That remains part of the reason why the series is so gripping, and so necessary: the themes within it are not those of the past; they remain ever-present in the US today.

A third of the initial episode is dedicated to the interrogation. Watching the relentless questioning and ruthless methods used by the police imbues a hopelessness very early on, and the fate of the boys seems inevitable. A particularly poignant part of the episode is when we watch as a police officer threatens one of the teenagers’ fathers with prison time he himself served in order to convince him to “talk sense” into his son. Bobby McCray tries to convince his son to comply, saying, “when the police want what they want, they will do anything.” Watching the detectives quibble as the coerced confessions don’t add up, you feel yourself willing them to see sense, to see that they’re wrong; they don’t.

The second episode starts with a focus on the media’s role. At the time Donald Trump, the US’ current president, took out $85,000-dollar newspaper ads entitled ‘Bring back the death penalty!’ with the intent to rally people around the case. The episode centres around the trial. From the outset, it’s stacked against the boys – they can’t pay for lawyers, the prosecution separates the trials so they can choose when to introduce evidence, and the judge, nine times out of ten, sides with the state. Watching the prosecution pick apart the words of the witnesses to obscure their meaning serves as a reminder of the inaccessibility of the legal system for working-class and oppressed people. All are found guilty.

The third part focuses on “the four” – Antron McCray, Kevin Richardson, Raymond Santana and Yusef Salaam, who spent their sentences in juvenile detention. It becomes clear that a huge racial imbalance exists within the centres. Still today, black male youths make up the highest demographic within juvenile detention, a huge 43%. This is despite the fact that black youth make up less than 11% of under-18s in the US. We also see how the divide is not just racial, but is a class divide. The parents worry about money for their kids to buy from the commissary, travel expenses, and the phone calls that cost up to $20 for 15 minutes. Unfortunately for the four, their sentence doesn’t stop when they’re released. They struggle to get jobs and have difficulty adjusting to life outside of prison, without any support given. One of the four, Raymond Santana, is rearrested, caught drug-dealing after he lost his job. Reoffending stats in the US are high; within five years of release, three-quarters of released prisoners are rearrested.

It bears reminding that the US has the highest prison population worldwide. Private companies don’t just make money from prisons through goods and services, but also exploit prisoners by forcing them to slave away to make profits for big companies. The prison industry in the USA has a net worth of $1.5 billion  and reportedly has made profits of up to $1.31 billion in 2018. It begs the question of whether the problem of mass incarceration is really one the government wants to solve when it is so profitable.

As the series begins to close the focus is on Korey Wise, the eldest, who at 16 goes to adult prison. Inside, he faces the same racism, beatings, and isolation. He is transferred nearly 400 miles away from his hometown of Harlem, making it almost impossible for his mother to travel to him when she already struggles to see him. To avoid the beatings Korey requests to be put in solitary confinement, which only compounds his isolation. Wise spent 14 years in prison, before the five were exonerated in 2002.

The series exercises feelings of anger, hatred and disbelief as you sit stunned by a police department relentless in their goal to put five youths, most of whom have never met before, behind bars. The justice system is riddled with systematic lies and contrivances that are megaphoned to the public through a complicit media that selects the salacious details for the purpose of ‘justice’ – putting innocent youth in prison.

While the men were awarded a $42 million settlement, no amount of money will bring back the time they lost, the trauma they experienced and how their lives were shaped by this injustice.