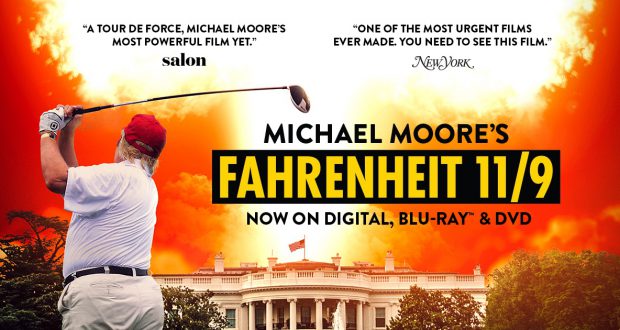 For many workers and young people seeking to understand the horrors of modern capitalism, the documentaries of Michael Moore often serve as an accessible introduction. Fahrenheit 11/9, his most recent, and perhaps politically sharpest film, will be similarly well-received by those looking to get to grips with US society in the age of Trump.

Moore outlines how Trump’s presidency didn’t fall out of nowhere. The havoc that corporate America has wreaked in the last number of decades, here made most painfully clear in the ongoing Flint water crisis, created the conditions for Trump.

His campaign tapped into the accumulated anger of a layer of white working-class and poor voters who had experienced the brutal effects of neoliberal policies by Democrats and Republicans alike. Alongside vile racist scapegoating, he peppered his speeches with anti-establishment rhetoric that would seem to put him on the side of the average worker against “Wall-Street sell-outs like Hilary Clinton.”

Perhaps a more important factor in understanding Trump’s victory were the 100 million who didn’t turn up to vote. Moore places the blame on Democrats’ wholesale embrace of neoliberalism, particularly their drift to the right under Clinton. Understandably, a vast section of US workers and youth remain apathetic during elections, as they see no party that represents their interests.

Nevertheless Fahrenheit 11/9 offers an optimistic depiction of the radicalisation currently taking place amongst many sections of society. From the 2018 West Virginia teachers’ strike, that saw a militant rank-and-file movement win a 5% pay rise (for not only teachers but all public sector workers), to the March for Our Lives protest that brought over 1.2 million young people out on the street against gun violence, more and more are drawing far-reaching conclusions about the nature of the system and the need to struggle for change. Moore brings this out with intimate interviews with those active on the ground.

This shift in consciousness has received political expression in the form of left democrats such as Alexandria Ocasio-Cortez and Rashida Tlaib, both of which make an appearance. Moore also sits down with Bernie Sanders, whose 2016 campaign for a political revolution tapped into the mass anger of millions of workers and youth.

Although Fahrenheit 11/9 pulls no punches in exposing the pernicious role of the Democratic Party, and particularly Obama in paving the way for Trump, Moore seems to stop short of advocating for the formation of a new worker’s party. At one point Tlaib reflects the view of many when she says she’s not ready to turn away from the Democratic party just yet but is attempting to reclaim it, although it is unclear whether these are Moore’s own views.

Yet, the Democratic Party, a capitalist party, firmly wedded to big business, can never represent the interests of working people. As Moore himself vividly shows, Sanders’ 2016 primary bid saw the Democratic National Committee (DNC) pull out every undemocratic manoeuvre to derail his attempt to be the presidential candidate.

Sanders breaking with the Democrats and running as an independent could have actually laid the basis for the worker’s party so desperately needed. Free of corporate influence, with democratically accountable leaders and armed with a socialist programme, such a party could draw together the various struggles of the working class and oppressed to properly challenge Trump and the system he stands for.