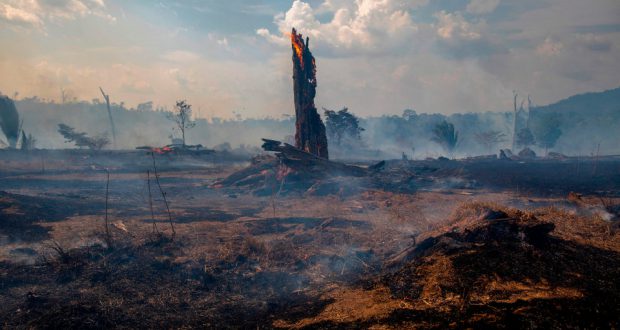 Appropriately named ‘The Lungs of the Earth’, producing roughly 10 percent of the world’s oxygen, the Amazon rainforest has, for the last three weeks been ravaged by wildfires. These are the product of arson by ranchers who feel emboldened by Bolsonaro’s regime, and are seeking to expand their operations into protected forest land.

Over 73,000 fires burned, causing extensive damage to the forest. Logging companies are currently butchering the forest at rate of 3 football fields per minute.

All for profit. The destruction of the Amazon would trigger the release of over 90 billion tons of carbon (40ppm) into the atmosphere, which would be a shot to the heart of the fight against climate change. Bolsonaro’s regime and capitalism have become a very real threat to humanity.

The US military is the largest institutional polluter of carbon emissions. If the US military were ranked as a country for its emissions, it would rank as the 47th largest emitter of greenhouse gases.

Since the early 1950s, over eight billion tons of plastics have been produced. Most of that now resides in landfills, the oceans, and the rest of the environment. Having now become obscenely pervasive, it can be found in the food we eat, and the water we drink. It has even been discovered in the stomachs of creatures that reside in the deepest recesses of the oceans!

Climate change is heating up

The most recent heatwave to blaze its way through Europe saw scorching heats achieving record breaking new heights reaching just under 46°C in France. These extreme heatwaves are a silent killer, and present an existential threat to vast regions across the planet. Without effective infrastructure in place, millions will be at fatal risk in the coming decades. We must leave the fossil fuels in the ground to avert complete disaster. We need anti-capitalist, socialist change, not climate change!

We are currently living through the sixth mass extinction in the planet’s lifecycle. Wild mammals now account for only 4% of all living mammal species, with the other 96% being composed of humans and livestock. (humans 36%, livestock 60%) 80% of the biomass of insects has disappeared in the last 30 years, mainly due to insecticide usage in crop cultivation and climate change.

James Connolly once said that “governments in capitalist society are but committees of the rich to manage the affairs of the capitalist class.” This is precisely the reason why capitalist governments worldwide are taking little to no action to fight global warming and environmental destruction. Political leaders are bought and paid for by wealthy capitalists through lobbying, campaign donations, and brown envelopes. Their roles are to facilitate the needs of big business. To curb emissions means to curb profits, and that’s the last thing the representatives of capital are going to do. That’s why working-class people, across the globe, need to assert their collective power by taking strike action. Attacking the profits of the capitalist class is the means to call them to order. Join the student strike on 20 September!