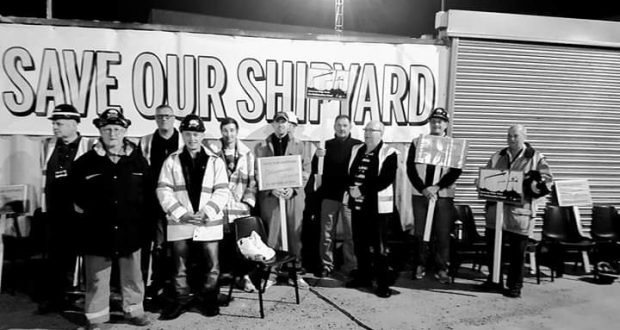 We salute the occupation of the shipyard by Harland & Wolff workers. The action you have taken is crucial in order to save the jobs that are under threat. The fact that you have both engaged in such militant action, and raised the demand for nationalisation of the yard to safeguard its future will put real pressure on the British government. It will also serve as an inspiration to other workers who see their jobs threatened. Your unionised and united workforce is a vital reference point for all workers.

Keeping the jobs and skills you have acquired over a long time in H&W is essential. We fully support the call for re-nationalisation on the basis of democratic workers control. Production could be further shifted to renewable energy infrastructure such as off-shore wind turbines. We are facing down a global production and environmental crisis, we need the skills of a workforce such as yours more than ever. Capitalism undermines the most essential work, in favour of what’s profitable to a tiny minority. Solidarity to your struggle to maintain jobs and skills.

We will be publicising your action and your cause in the South, particularly in the trade union movement. We will be calling on ICTU to organise a major demonstration in support of your demand, and we believe thousands of workers would turn out to defend the jobs and working conditions.