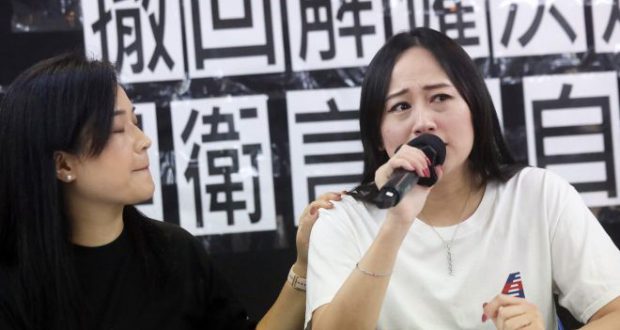 By Socialist Action reporters (our sister organisation in Hong Kong)

The trade union chairperson for 2,000 flight attendants at Hong Kong’s Cathay Dragon airline, Rebecca Sy On-na, has been sacked. This is the latest and most serious attack on employees at Hong Kong’s airport and airline industry during the city’s mass pro-democracy protests of the past two months. At least fourteen airline employees have now been sacked or resigned in a widening purge by companies under pressure from the Chinese dictatorship.

Hong Kong has been rocked by truly gigantic mass protests involving as many as two million of its seven million population. The protests which erupted against the government’s proposed extradition law have morphed into a mass uprising for democratic rights and against economic injustice and the lack of affordable housing.

Rebecca Sy On-na was called to a meeting with management on august 21, at which she was shown three screen shots of comments she allegedly posted on her private Facebook page and asked to confirm they were hers. According to Apple Daily newspaper, the screen shots were taken by a former airline employee who is a relative of a senior police officer. The ex-employee first sent them to pro-government organisations urging people to “report” Sy to the Civil Aviation Administration of China (CAAC), an agency under Beijing’s Ministry of Transport.

The CAAC has imposed new “safety” laws for Hong Kong flights over Chinese airspace since the mass protests began in Hong Kong in June. These regulations have nothing to do with safety but everything to do with discriminating and victimising airline staff who show sympathy with the protests. The Chinese side’s pressure increased again in the wake of mass protests at Hong Kong’s airport in mid-August.

“This is not just about me,” said Sy. “This is about the whole industry. This is about Hong Kong. When will this white terror end?”

Clearly, the attack on Sy is part of a wider attack on the protest movement, but especially on the aviation sector trade unions, with the aim of silencing a crucial and powerful group of workers who have shown their sympathy on several occasions with the mass protests. Chinese government pressure, as the Financial Times reported, was responsible for forcing Cathay Pacific’s CEO Rupert Hogg to resign because he was seen as “too liberal” over the issue of staff participation in protests. “Chinese media outlets have piled pressure on them [Hong Kong companies] to dismiss employees who call for greater democracy,” the FT reported (August 26).

The crackdown against employees and trade unions at the airport is to exact revenge especially for the mass occupations and protests there, which were not organised by the workforce or unions, but which showed a way to inflict huge costs on companies that support the government line. The two-day occupation of the world’s eighth largest airport on August 12-13, with around 50,000 protestors converging on the airport arrivals hall, forced the cancellation of more than 500 flights and cost the industry an estimated HK$600 million.

The Cathay Dragon Flight Attendants Union is part of the Hong Kong Confederation of Trade Union, with 190,000 members across the territory. HKCTU’s chairperson Carol Ng Man-yee told Hong Kong Free Press that unions in the aviation sector were now being targeted because they had the highest participation rate of any unions in the August 5 general strike.

This political strike in support of the mass movement was the first for almost a century in Hong Kong. It saw around 350,000 workers join the stoppage, a majority of whom were not union members.

Cathay Pacific and its subsidiary Cathay Dragon are part of the billionaire Swire Pacific group, one of the major conglomerates in Hong Kong, with interests in property, transport, industrial, food and beverages. Swire controls around one-third of global Coca Cola deliveries in China, Asia and 13 US states.

With their attacks on trade unionism and freedom of speech, even policing the contents of employees’ personal Facebook accounts, Cathay bosses have shown they are a political tool of China’s one-party dictatorship for cracking down against the mass protests in Hong Kong.

While trade unions have not played a prominent role in Hong Kong’s mass struggle to date, the airline bosses and their counterparts in other sectors understand the unions could play a far more powerful, even a decisive role, given their potential power to close down economic activity – and hit company profits. In that sense the attack on the airline workers and their unions seems to be a preemptive strike by a section of the Chinese regime’s corporate Hong Kong support base to avert a future threat from the trade unions emerging in a leadership role for the wider mass movement.

In recent weeks Beijing has stepped up its pressure on Hong Kong’s business groups to declare loyalty to the beleaguered government of Chief Executive Carrie Lam and to denounce the mass protests. Business tycoons have run a series of paid full-page press adverts to this effect.

Swire Pacific is among the corporate groups to declare its political stance. “We must act now to stop the violence and preserve the stability, peace and prosperity of Hong Kong,” it said in a statement issued on August 13, adding that it fully backs Cathay Pacific’s “strict implementation” of the Chinese government and CAAC’s “directives to ensure safety, and its zero-tolerance approach to illegal activities.”

For the trade unions in Hong Kong this is a very serious attack. By singling out Rebecca Sy the company clearly seeks to smash or at least severely weaken one of the most organised and potentially powerful unionised groups in Hong Kong. The HKCTU must answer this now with a clear call for strike action and solidarity strikes by workers in other sectors. The demand should be unequivocal: Reinstate Rebecca Sy On-na and end the white terror against airline employees.

The HKCTU has announced its intention to file a lawsuit for wrongful dismissal against the company. But legal challenges are a very limited and unreliable weapon for workers’ organisations. One of the biggest problems is they consume valuable time when the best time to act is now. This means mobilising the full support of Cathay workers and other airline workers who are facing similar attacks, while the whole populace is already on its feet in the biggest protests for at least 50 years.

It would be a mistake to wait and allow the attack on Rebecca Sy to stand without an immediate and forceful reply in the form of strike action.

Unions should send solidarity messages to: 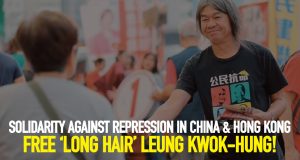 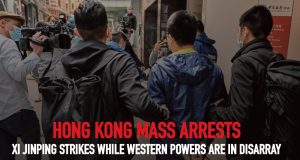