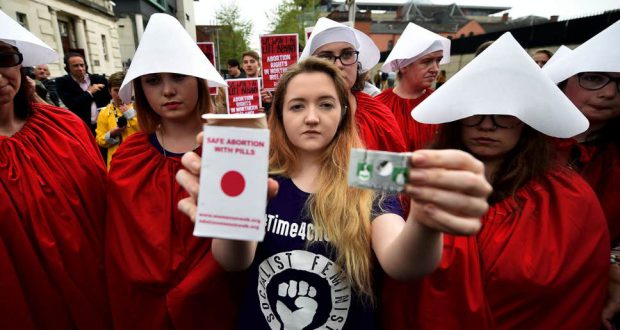 Over three-quarters of MPs in the House of Commons have voted to extend abortion rights and equal marriage here via amendments to the Northern Ireland Bill. If made into law, the amendments would remove the North from the 1861 Offences Against the Person Act, decriminalising abortion, in the event that Stormont does not resume by 22 October.

The amendments reflect the real situation in Northern Ireland. Overwhelming majorities in both communities support the decriminalisation of abortion and equality for LGBTQ+ people. Medical abortions take place daily here, as pregnant people obtain safe abortion pills, principally from organisations such as Women on Web. The abortion ban means that these procedures take place shrouded in secrecy, stigma and threat of criminalisation, though available free on the NHS in the rest of the UK. The law can risk women’s lives, as in the case of pro-choice campaigner Sarah Ewart, who was denied a life-saving abortion in Northern Ireland.

No progress without struggle

Bills and amendments that have been put forward by Labour MPs have been a positive reflection of a desire for change and were given impetus by the referendum victories in the South for marriage equality and to repeal the anti-choice eighth amendment. Key to these victories were grassroots movements, in which new activists were mobilised, particularly young people. Activism by ROSA, the socialist-feminist movement, highlighting the safety and availability of abortion pills played a central role in forcing the establishment to shift its position. ROSA’s abortion pill bus in the North helped spark an emergency debate in Westminster on the issue in June of last year.

In 2015, the Irish Congress of Trade Unions called a protest for marriage equality, attended by 20,000 in Belfast. This gives just a small glimpse of the potential power that the trade union movement, with its 250,000 members, has to defeat oppressive laws, and the ability of workers to collectively transform society. Trade unions must take the lead in fighting all forms of oppression, and must also wield their power in the fight against austerity and cuts to public services. Cuts significantly undermine equality in real terms, not only because they attack the living standards of working-class people in general, but also because they can lead to closures of – and reduced access to – services which women and LGBT+ people rely upon in particular.

We need a real alternative

The Westminster vote is a great step forward, but the LGBT+ and pro-choice movements, alongside the and trade unions, must demand that these rights are upheld irrespective of whether an assembly is in place, and that legislative change leads to real change. The right-wing DUP, who voted unanimously against the amendments, can present obstacles to this. Similary, Sinn Féin – who adopted a pro-choice position only after the Irish repeal referendum, and who abandoned the demand for marriage equality during the last round of Stormont negotiations – can’t be trusted to champion equality.

All the main parties, in power, have implemented austerity. A truly cross-community, working-class political alternative must be built, fighting to resist division and to find, in solidarity, ways to overcome sectarianism. This is the only sure foundation for progress in Northern Ireland and for defending the rights that have been won.