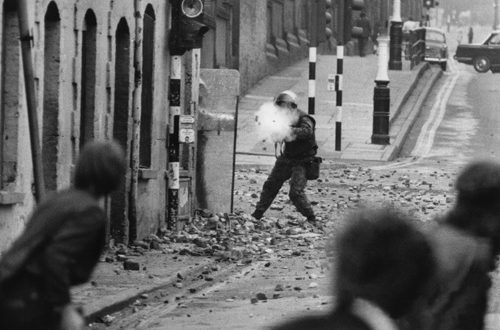 For many, August 1969 was the month that saw the real beginning of the Troubles in the North. British troops were sent into Northern Ireland supposedly as a “stop gap”, but one that would remain for decades.

Ten months earlier, the repression of a civil rights protest on the streets of Derry saw the situation erupt with Catholic workers and youth onto streets revolting against half a century of discrimination and poverty. Not only was Unionism discredited, but so too were the ideas of right-wing nationalism – socialist ideas gained a massive echo.

Importantly these ideas could reach out to Protestant workers who also suffered poverty conditions, particularly in housing. The paramilitary organisations that would come forward as “the defenders” of communities at this point had little support. Loyalist paramilitaries had little success at reorganising, and the IRA had still not recovered from the failure of the “border campaign” of the 1950s.

However, a backlash to the civil rights movement was gaining ground, and in the months leading up to August there was serious rioting in Derry, Armagh and other areas. Tensions where high in the run up to the annual Derry Apprentice Boys march.  It started off peacefully, in large part due to the efforts of Derry Labour Party and Young Socialist members trying to stop young people from the Bogside from attacking the marchers. When stones where thrown at the parade the RUC responded with a full scale assault on the Bogside.

The response of the people of the Bogside, including the Young Socialists and Derry Labour Party activists attempting to stop violence, was to erect barricades and fight to defend the area. The “Battle of the Bogside” raged for two days. Adding flames to the fire was the southern Irish government, with then Taoiseach Jack Lynch saying that they “would not stand idly by” as these events in the North developed. In reality this was bluster, as the government did precisely that, however it was seen by Protestants in the North as a serious threat.

The RUC forces had been depleted due to rioting, 600 of the 3,600 RUC officers were injured. The Unionist government response was to call up the reserves – the 8,500 all-protestant notorious “B-specials.” Had such a violent sectarian militia been deployed against the people of the Bogside, there would have been a bloodbath that would have precipitated a sectarian civil war across the North.

The entry of British troops was therefore welcomed by locals – with famous pictures of troops been offered tea, as the situation calmed in Derry. It erupted in Belfast with sectarian violence in West Belfast. In this situation many civil rights leaders, including those on the left, welcomed the entry of troops into Northern Ireland arguing that it offered a “breathing space.”

Many of these same groups would later support the Provisional IRA campaign. The small forces of Militant, the forerunner of the Socialist Party, argued that “the call made for the entry of British troops will turn to vinegar in the mouths of some of the civil rights leaders. The troops have been sent to impose a solution in the interests of British and Ulster big business.”

The role of the working class

Militant argued for the labour movement to take the lead and organise a “trade union defence force” against sectarianism. This wasn’t an abstract position. As Peter Hadden outlines in detail in Common History, Common Struggle, the fact that the Troubles did not spread to other areas or the workplaces was mainly down to initiatives taken by trade union and working-class activists on the ground. In many areas peace was maintained by committees set up by working-class residents, uniting both Catholic and Protestant workers.

When Loyalist bigots issued “get out or be burnt out” threats against Catholic families living in the largely Protestant working-class areas of East Belfast, local peace committee activists responded with leaflets put through Catholic doors saying “stay put, we will protect you. ”

The untold story of this period is the heroic role played by trade union activist and others in resisting sectarianism. This could have provided the basis to push back against sectarianism rather than the growth of paramilitary violence. Socialists have a responsibility to bring out this hidden history.