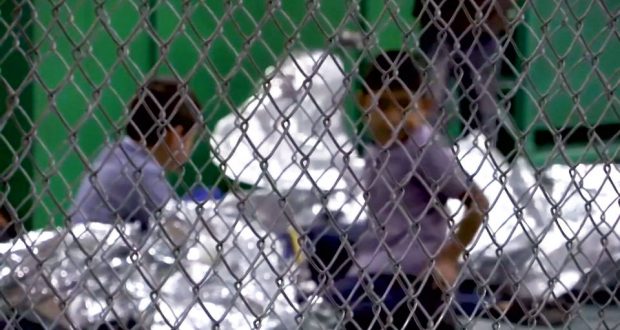 At the end of June, the harrowing photo showing a drowned father and daughter lying face down in the water, the girl tucked into her father’s t-shirt, went viral. Óscar Alberto Martínez Ramírez and his one-year old daughter Valeria died in the water of the Rio Grande on the US-Mexican border. They were the victims of the US State’s racist immigration controls.

Trump has tightened controls, deployed 5,000 troops on the border and forced the Mexican government to deploy their own migration patrols with the threat of trade tariffs. The goal is to stop migrants from crossing over into the US and to limit the number of asylum seekers the US accepts each day. Here is an illustration of how the death of Óscar and Valeria are directly related.

In April, the family left their home in El Salvador, infamous for deep poverty and extreme violence. After waiting for an appointment to apply for asylum for two months in Tapachula in Southern Mexico they crossed the country, making their way to the Gateway International Bridge to Texas.

They joined a long list of people waiting for one of only three interview slots per day! Facing another potential wait of several months the family decided to cross the river a few hundred metres away from the bridge. The desperate conditions in much of Central and Latin America mean that the crackdown does not deter migrants but pushes them into more dangerous actions.

Recently workers of the furnishing retailer Wayfairers learned of an order for a new detention centre to imprison 1,600 “unaccompanied minors” and demanded their CEO stop doing business with the company fitting out the centres. When he refused, they walked out in solidarity, gathering at a rally, with signs reading for example “A prison with a bed is still a prison”. In a letter the workers said that “the US government and its contractors are responsible for the mistreatment of refugees seeking asylum – we want that to end it”.

Migrant detention is a huge industry, and surveillance, which is one aspect, is being made public by activists and workers in the tech industry. This ranges from criticism of Amazon and Microsoft for selling facial recognition software or cloud services powering these technologies to US law enforcement, to Google workers protesting the provision of artificial intelligence technology to the Pentagon.