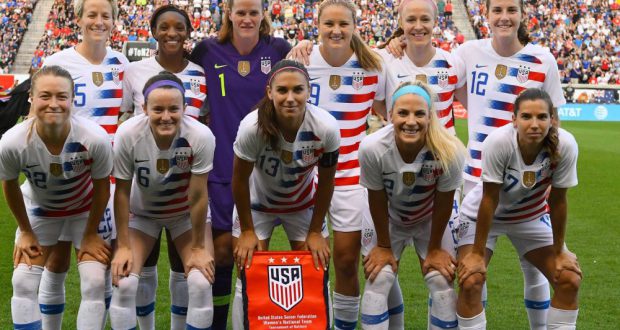 By Maddie Grover (member of Socialist Alternative, sister party of the Socialist Party)

Like many workers experiencing unfair treatment at their workplace, the players faced impassable barriers trying to go through their employer’s structures. Countless workers, particularly women, have experienced similar setbacks with forced arbitration, the workplace rule by which employees experiencing harassment can take action only through the company’s appointed mediator, who aims first and foremost to protect the company from financial loss.

In this case, in addition to defending the sexist gender pay gap, the USSF is defending the very way in which it funds soccer across all levels of the sport in the U.S. One of the stars of the U.S. Women’s National Team, Megan Rapinoe explained in an interview, “I don’t think you can talk about compensation articulately or intelligently until you have a conversation about funding across the board.”

Since the last Women’s World Cup in 2015, the terrain around the fight for women’s rights has changed dramatically. The #MeToo Movement has taken down high profile, previously untouchable powerful men. This is extremely positive and points to just how much this movement can accomplish. Especially on this new terrain, we need to bring the fight beyond a lawsuit and challenge the system that organizes sports and recreation based on massive profit for the few, at a cost to the rest of society.

Basis of the USWNT lawsuit

While members of the Women’s National Team and the Men’s National Team work for the same employer, the USSF, there are massive disparities in the compensation and treatment they receive. According to the lawsuit, if a top-tier USWNT player played and won 20 games, she would make only 38% of what a USMNT player would in an equivalent situation. In the last Men’s World Cup in 2014, the USMNT was awarded more than $5.3 million after being beat out in the Round of 16, while the women’s team was awarded $1.7 million for winning the entire Women’s World Cup a year later. Despite becoming the world champions, the USWNT was paid three-times less than their male counterparts!

Beyond the unequal compensation, the women’s team also works in overall inferior conditions. We reported in 2015 about these long standing differences, citing the fact that in a three year period  the USWNT played approximately 1 in 5 games on artificial turf, which has been long known to seriously contribute to injuries and significantly lengthen recovery time from a match. In that same period, the MNT only played 1 in 50 games on turf.

A movement that can go further

As many of the USWNT players have acknowledged, there is much more to win than what is spelled out in their lawsuit. A meaningful victory would require a fighting movement to demand improvements to the state of sports and athletics for the working class.

As we have seen since #MeToo erupted, powerful predators have been taken down by the mass anger of working people, particularly women, who have endured harassment often since entering the workforce. Sepp Blatter, the corrupt former head of FIFA has been accused of sexual assault and is on record stating that women athletes should wear tighter shorts. Blatter personifies the misogyny that is rampant at the highest levels in the worlds of sports and business. This sexism was on full display as well when 2018 Ballon d’Or (literally “golden ball” which honors the best male and female players in European leagues) winner Ada Hergerberg was asked by the presenter if she could “twerk” rather than anything about her on-field accomplishments.

Just like sexism is part of the game for women players, non-white players have to face racism on and off the field. Racism remains a massive problem in soccer from the professional level down to the youth levels. Many famous athletes have and continue to speak out against racism – including Megan Rapinoe who takes a knee during the national anthem – but the anti-racist campaigns waged by FIFA and other bodies have fallen short. Racism, sexism, and homophobia in soccer are a reflection of the divisions created by capitalist society, which are unfortunately heightened in the current atmosphere where the far right is emboldened by Trump and others.

We need to use the momentum of #MeToo victories and escalate the movement to challenge the system that depends on sexism and racism and financially rewards mistreatment, harassment and exploitation of workers: from fast food workers to the Women’s National Team.

Development and investment is driven by profit

The US Soccer Federation’s mission is to support the development of soccer, recreational and professional. While the USSF does makes minor investments in select youth programming, it overwhelmingly takes the form of selective pre-professional teams. The focus of the USSF investment is to present marketable stars who can be brand ambassadors in advertisements. Their efforts instead should be focused on the development of the game, including resources, coaching, and teams for people of all abilities

Corporations see professional and top level sports as little more than living billboards, preying on the fact that so many people live and breathe their teams. Businesses pay hundreds of millions of dollars each year to put their logos on important teams and players. They spend notably less money on women’s teams than on men’s, which is cited by the USSF as for why the USWNT is paid less.

Even though the USWNT has enjoyed huge success, the USSF justifies paying women less than men for the same work on the basis that the women bring in less advertising revenue. The fantastic viewership numbers of the Women’s World Cup, even without the promotion and coverage the Men’s World Cup receives, show that it is simply not the case that people do not watch women’s soccer.

Instead of proving that the USWNT has as much potential to generate profit for their corporate sponsors, we should fully reject the basis of that argument, which is that a woman only deserves equal pay if she can produce the same profits for her boss as a man.

The reality of sports for the working-class

The story of disparity between the men’s and women’s national team is incomplete without looking at the sorry state of sports for working class communities. The places where young people become involved in sports, like schools, community centers, and public fields and facilities have endured massive cuts and are either understaffed, out of date, or have simply been shut down.

As consistent budget cuts have lead to the dilapidation of many urban public parks and facilities, nearby corporations have enjoyed massive tax breaks. With investment in the upkeep of public facilities dwindling, particularly in low income and communities of color, a pay-to-play model is often the only option. High quality youth teams often cost thousands of dollars per season, along with huge travel and time commitments. Not surprisingly, there has been a decline in youth participating in sports in the U.S., and the trend is clearest in low-income families.

Most young women and girls are not going to be placed on the elite track and become professional athletes. This means that for girls and young women trying to pursue sports, the fight for proper public funding of athletics is a feminist issue, even more so than pay disparities for top athletes.

We would see far reaching positive impacts from investing in sports and athletics on the basis of what is good for the most people, rather than what is good for corporations, without requiring women to justify themselves as effective billboards.

A massive public investment in infrastructure could result in a project to build and repair public fields, facilities, and community centers. An undertaking of this size and scale could generate huge numbers of union jobs, where workers can earn good wages and have fair benefits. Instead of providing tax cuts to big business, cities and towns should fund this kind of project.

There is recent global research that shows that a community’s access to sports is correlated to long term gains in education, personal development, and lifelong wellbeing. Youth deserve access to sports for the sake of their benefits, whether or not they are going to make the cut onto a national team. The opportunity to enjoy the basic benefits you get from being an athlete should be available to everyone. This logic should guide the development of sports in the U.S., not the USSF and corporate sponsors’ profit making model.

The USWNT lawsuit is bringing much-needed publicity to the sexism within sports. To make real change, we need to build a movement in our communities as well. The USWNT and our movement for fair funding should demand that cities develop programs and facilities available to everyone. The USWNT should link up their fight for equal pay with unions, and show solidarity with other workers fighting to end austerity. By linking their fight to broader layers, particularly the budding labor movement, the USWNT could gain mass support and pressure USSF into changing the very way it funds soccer.

In a system where sports, and athletes themselves, are treated as something to make money off of, inequality is an inherent part of the game. Under capitalism, funding is based on producing profit for the wealthy, which has never been good for working people. This is clear with the examples of education, health care, and housing, which under capitalism are commodities, not rights. Instead, the logic of capitalism means that all these industries are driven by the potential to generate profit. This has resulted in massive inequalities and shortcomings.

The sports industry’s method of investing with the sole motivation to profit will not result in positive outcomes for children and youth overall. Unfortunately, tweaking the rules of the USSF and corporate sponsorship won’t address the root problem, because generating profit for the few while the majority suffer is the very nature of capitalism.

We could take a huge step towards a more fundamental change by taking sports teams, leagues, and national federations into public ownership. Decisions about funding could be made democratically, and sports would be organized for the maximum public benefit. Sports clubs and teams could be owned and managed by communities, and funding could be generated by taxing big business.

There is some semblance of community ownership in the publicly owned Green Bay Packers, and in european clubs like Barcelona and Real Madrid, where individuals can buy in and have limited voting rights. If this idea were expanded to community centers and youth sports programming, athletics would become dramatically more accessible to working people. A system like this would be capable of sharing out the benefits of sports to all communities and players, regardless of gender.