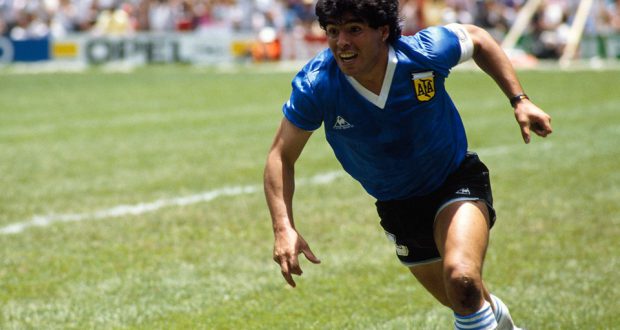 Diego Maradona, now 58, is the subject of Asif Kapidia’s latest film examining fame. Using access to hundreds of hours of unseen private footage, new interviews with Maradona, narration from his personal trainer and his ex-wife, and contemporary footage he has constructed an enthralling two hours and ten minutes of film.  It opens with a frantic, edge of the seat car trip through Naples that sets the scene for events to come. We also get some sense of Maradona’s background. At just 15 he, through football, took his family out of the poverty of a Buenos Aires shanty town. He was subsequently sold, twice in three years, for world record fees as capitalism and money from corporate interests took a firmer grip on the game. The film focuses to two events that defined Maradona. In both cases Kapidia puts them in their social and economic context. The 1986 World Cup quarter final against England is placed in the context of the Falklands War and the humiliating defeat inflicted on Argentina by Thatcher.

The Naples that embraced Maradona is also brought out using footage from Italian league matches. The racist abuse engaged in by sections of Ultras from the big northern Italian clubs is particularly striking today given the presence of Salvini’s La Lega in the current Italian government. Maradona led Napoli from relegation fancied minnows to two league titles, two Italian Cups and a Uefa Cup in his seven seasons there. His links with the Camorra, and his introduction to cocaine are all revealed through intimate footage and stills.

In dealing with the 1990 World Cup in Italy, where in the semi-final Italy were pitted against Argentina in Naples the film explores divided loyalties in Naples, which Maradona played into, and the efforts of the Italian press to try and win over a city that has been economically neglected. Maradona led Argentina to victory, scoring, celebrating joyously and in effect sealing his departure from Italian football.

The director explores the backlash heaped on Maradona by the Italian establishment, and state. Maradona was rapidly under the eye of revenue, received regular drug tests and a ban, was dragged across the media and was associated with the buying of sex from sex workers linked to the Camorra gangs. When he fled to Argentina, he was arrested in a drugs bust, all under a barrage of cameras and mass attention. The film ends with Maradona admitting to his biggest deception and finally accepting the paternity of his estranged partner’s son.

The sense from the film is of a football genius at a time when rampant commercialisation, individualism and celebrity were pushed over the collective experience. In a system unable to meet the aspirations of the vast majority, Maradona was embraced and elevated by those he inspired and ultimately taken down, directly or indirectly, by those who sought to profit from him.