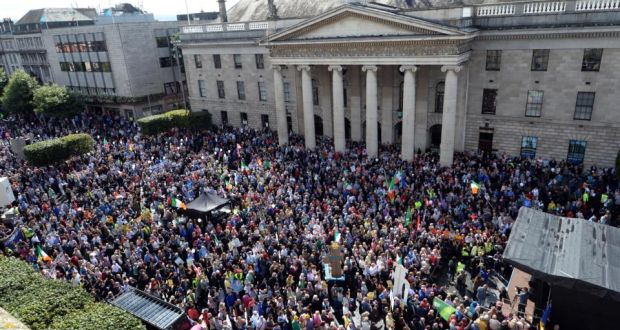 From 1 July, Irish Water is seeking to implement excessive-use water charges of up to €500 per year. This will come as no great surprise to those of us who highlighted the programme for government agreed between Fianna Fáil and Fine Gael back in 2016. The Socialist Party opposed and warned about this element of the legislation at the time, as we knew that is could be used as a back door to the re-introduction of full water charges in the future. The legislation allows the government to lower the amount of water that is considered normal usage over time. Just like with tuition fees and bin charges, the amounts will be increased incrementally until the idea of direct payment for water becomes normalised, or at least this is their hope.

2014-2015 saw a campaign of direct action and civil disobedience that saw tens of thousands of households across the country join protests, block the installation of meters and, perhaps most significantly, refuse to pay the bills, forcing the political establishment to back down. Fianna Fáil’s support for “excessive use” charges was no surprise, as they had previously supported water charges, but were forced to oppose them in the 2016 election as the charge had become politically toxic. The excessive usage charge was always seen as a back door for the reintroduction of full charges by the mainstream political parties. Since the abolition of water charges, the Government and Irish Water along with sections of the mainstream media have been operating a not-so-subtle propaganda campaign to win people over to the logic of water charges, using environmental concerns and threats of water shortages as a means to try and convince people. The facts show, however, that commodifying water does little to address these concerns and in reality this exposes their real agenda which is to create the conditions for private companies to get their hands on our public water services.

Currently about 40% of households throughout the country have no water meters installed due to the massive campaign of resistance that succeeded in defeating the Fine Gael/Labour government’s water charge plan, so it remains to been seen how the Government or Irish water would be able to justify charging some people and not others. Any attempt to implement excessive use charges should be met with the same mass resistance and non-payment of bills.