The ordering, and subsequent cancellation of military strikes against Iran by the Trump administration is merely the latest in a series of escalations by the United States aimed at that country. The strikes that were apparently launched followed the shooting down of an unmanned drone in the Strait of Hormuz, but Trump claims he decided to change his mind due to the stated reason that he felt the death toll would have been disproportionate. The United States has also accused Iran of an attack on two oil tankers in the region, but has not provided evidence.

The backdrop for this is the strategy of maximum pressure taken by the Trump administration towards Iran. This has seen the United States walk away from the Joint Comprehensive Plan of Action nuclear deal negotiated by Iran and the Obama administration, and implement severe sanctions against the country. In addition to breaking the agreement, the US sanctions have been used to pressure other countries into not buying Iranian Oil, with the stated aim of reducing its oil exports to zero.  This is despite the fact that Iran at no stage had breached the terms of the deal. As a result of the sanctions the GDP of Iran fell by 3.9% in 2018, with inflation hitting 52.4% this year. Iran announced that it would start increasing its uranium enrichment due to the pointlessness of continuing to abide by a deal that is providing none of the promised economic benefits, with those opposed to the US’s actions, such as the EU, doing little to mitigate the sanctions.

Trump and his hawks

The Trump administrations demands on Iran are malicious and often absurd, such as a statement released by the White House press secretary stating that “even before the deals existence, Iran was violating its terms.” Trump’s policy, while erratic, is most reflective of some of the hawkish figures he has surrounded himself with, most prominently his national security advisor John Bolton. The Trump administration have ramped up their support for the MEK, a group up until recently on their own list of designated terrorist groups and widely hated in Iran for their role going back as far as supporting Saddam Hussein’s forces in the Iran-Iraq War. The Middle East has been going through a regional Cold War, with conflicts exploited by various governments to project their power in the region, with their bloodiest expression in recent years being the Civil Wars in Syria and Yemen. The Iranian government have been a prominent participant in this, with their position having been significantly strengthened by the 2003 invasion of Iraq by the United States and its allies.

Need for a workers’ movement

It is a reality that the 40 year-long rule by the Iranian theocracy is correctly seen by many as kleptocratic, and opposition to the rule of the supreme leader Ayatollah Khamenei is significant. Large mobilisations, beginning with the mass protests in December 2017 have been an increasingly common feature in Iran.  This has seen strike action by a number of groups of workers both for general economic demands, but also seeking the end to Khamenei’s rule. There have also been struggles against women’s oppression in Iran, with numerous protests against the compulsory hijab and the many other restrictions placed on women’s freedoms by the ruling theocrats. The nature of this opposition has disorientated the government in Iran, with different factions attempting to exploit a movement outside of their control to their advantage, but ultimately resorting to repression to undermine them. Socialists oppose those in the White House and its allies looking to make Iranians suffer through sanctions or military strikes. We oppose all imperialist intervention into the Middle East. It is also clear that the Iranian government offers no hope for its population. It is only through building a workers’ movement in Iran and throughout the region, based on a revolutionary socialist programme can imperialism and the repressive capitalist regimes that dominate this region be defeated. 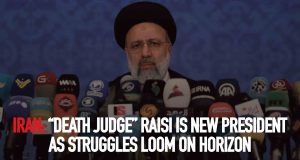