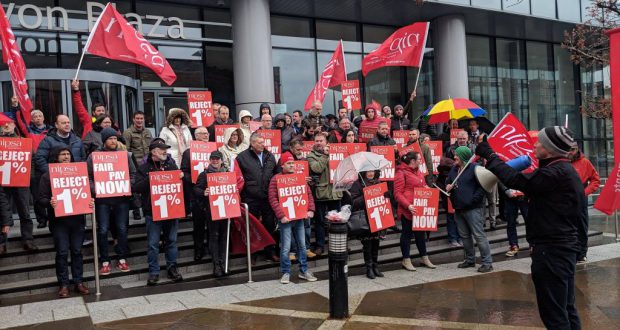 Following an overwhelming majority decision by ballot of its members, trade union NIPSA has called industrial action by Northern Ireland civil servants in opposition to the disgraceful imposition of another below-inflation 1% pay-‘award’ while consultation was still ongoing, as well as the continued degradation of terms and conditions which NIPSA believes is the beginning of an all-out assault. The 2018/19 pay award is a complete slap in the face for workers who are justifiably angry, having seen their counterparts in Scotland receive 4% in comparison. After seven years of pay-restraint, many civil servants are using food banks, working second jobs or relying on credit to get by.
The lack of a functioning Assembly in Northern Ireland has created difficulties for all members of the public, but while the politicians on the hill have been unable to cross their red lines, civil servants have been ensuring that public services function. The outright lie that there is no money to pay for a decent and fair pay increase for civil servants must be totally rejected. The Voluntary Exit scheme which Stormont funded through a dodgy loan from Westminster saw the loss of 3,000 experienced civil servants, which in turn added pressure of extra work to cover the immense shortfall. Agency workers – on precarious contracts – have been brought in to help plug the gaps, showing the short-sighted and feckless attitude of the politicians and senior management to the public purse.

NIPSA membership are up for the fight to get a decent pay increase and to hold onto the hard-won terms and conditions they see are being eroded. The disgraceful imposition of the pay ‘deal’ has galvanised the determination of the workforce and many new members are joining to stand up for their right to be treated with respect. They know that one day of action is not going to be enough to bring the management side to the table and are fully prepared for all avenues of escalating industrial action. The membership are ready to fight their corner and expect a strong leadership to carry that forward.

Socialist Party activists in the civil service call on the wider trade union movement and the general public to support the actions being taken. We call on people not to cross our picket lines, to join our protests and rallies and help put pressure on senior management and the politicians. A victory for the civil servants in our campaign for a 7% pay-rise will strike a blow against pay-restraint across the public sector and beyond and can raise the confidence of all workers to begin a broader struggle against austerity, poverty pay and precarious work.