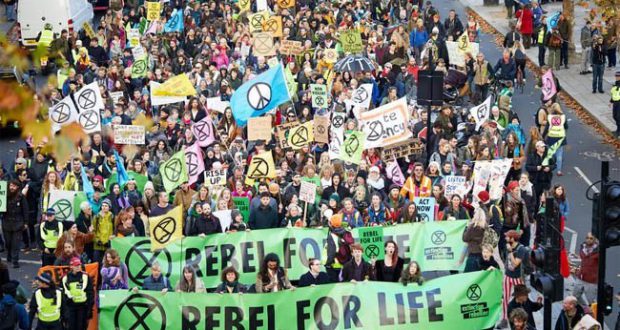 The mass anger over the developing climate catastrophe is bubbling over. This has been reflected particularly in the major youth protests and school student strikes, which has spread all over the world.

Despite this very important movement, governments continue to largely pay lip service to the issue while the crisis continues unabated. Many young people will be looking for answers for how the movement can go forward and win decisive change. The vast majority of protesters are not affiliated to any organised group. Some groups have emerged however, which point to the different tactics and ideas which can be looked to by those trying to avert environmental crisis.

Extinction Rebellion (XR) is one such organisation, which distinguished itself by its use of militant tactics, which for many match up with the urgency of the crisis. XR was founded in Britain but actions have taken place and groups have been formed in many countries under the same banner, including in Ireland.

They have included a protest of 400 outside No.10 Downing St where fake blood was poured on the road, and blockades of roads, bridges and the London Stock Exchange. In November 2018, approximately 6,000 people participated in blockades of London’s five main bridges.

Socialists support these forms of militant protest as a tool to draw attention to the climate crisis. This should not be a substitute to building a mass movement of millions, mobilising huge numbers into the streets and building for strike action. It is crucial that this includes action by workers who have the power to bring the system and its environmental destruction to a halt by collectively withdrawing their labour.

For us, at the root of the climate crisis is the capitalist system with its relentless pursuit of profit. One hundred companies are responsible for 71% of emissions since 1988. These companies are wedded to their short terms profits, and will not be convinced to be ‘’allies’’ in the fight against climate change.

And the issue is not just energy companies – since the Paris Climate Agreement 33 private banks have invested $1.9 trillion into fossil fuels. For real action on climate, we need a confrontation with these companies, the governments which represent their interests, and an end to the capitalist system which underpins the destruction of our planet.

It is unfortunate that, despite their confrontational tactics, XR is in reality seeking consensus by not taking into account the real class interests that prevent this issue being properly tackled. One of its three key demands is: “Government must create and be led by the decisions of a Citizens’ Assembly on climate and ecological justice.” They say that “Citizens’ assemblies are often used to address issues that are deemed too controversial and difficult for politicians to deal with successfully by themselves.”

They actually point to the example of Ireland as a positive- not just on abortion and marriage equality but on the issue of climate change itself: “The recommendations of their citizens’ assembly on Making Ireland a Leader in Tackling Climate Change is currently being incorporated into the Government’s action plan.”

But, as Extinction Rebellion Ireland has pointed out, the government’s Climate action plan is woefully inadequate to the scale of the crisis. The reality is, that while a Citizens’ Assembly may put forward recommendations which cut against the interests of big business and capitalist governments, it is a process which will be set up by those forces to deliver a result they can work with, and manage from their own point of view.

It is not a way of overcoming the power of the fossil fuel companies and capitalist interests generally. To do this, the movement needs to be armed with a socialist and class analysis and programme. This means fighting for demands, such as free public transport, which don’t accept the logic of the market system and fighting for public ownership of the energy industry and the key industries generally. On the basis of democratic socialist planning, a rapid and planned transition away from fossil fuels will create an environmentally sustainable economy.