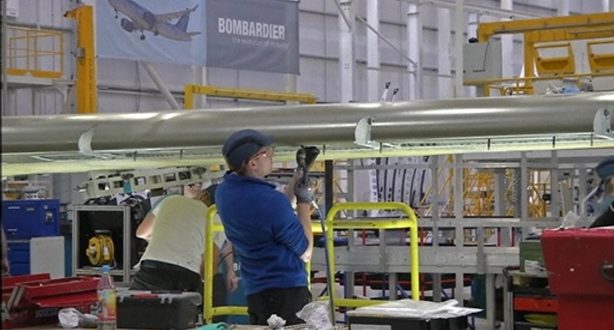 Three thousand, six hundred highly skilled workers at Bombardier, an aircraft manufacturer in the North, have been dealt another blow by the announcement that the multi-billion euro company is to sell-off its global aero structures division. The news came unexpectedly just days after the workers and their union Unite celebrated a significant victory in fighting off compulsory redundancies. The threat of workers balloting for industrial action to defend jobs and skills not only halted the redundancies, but also resulted in those who were targeted in the last round being offered their jobs back! The sale to Mitsubishi for €487 million has been talked up by industry bosses as “hugely beneficial to the global aerospace market” but no assurances have been provided regarding the maintaining of jobs and skills in Northern Ireland.

Any job losses in Bombardier would be hugely significant – devastating the livelihoods of workers and their families not just employed by the company but many thousands indirectly, as well as the criminal loss of skills. The company accounts for almost 5% of the entire labour force of the North and over 10% of manufacturing GDP.

This is in the context of a decline of the manufacturing sector and a stepping up of the race to the bottom making the North a low-wage economy. Despite the company maintaining an operating profit of over €4 million, the workforce has been slashed drastically over recent years, less than half of what it was in 1990. It is clear corporate greed and the appeasement of shareholders has been plunging the company towards death by a thousand cuts.

The sectarian political parties in the North alongside the Tories in Westminster have done little to ensure that jobs are maintained. They are, of course, under pressure to defend jobs – as demonstrated by previous campaigns by the union – however they remain ideologically wed to appeasing the markets and as a result are incapable of intervening.

Union shop stewards at Bombardier have responded robustly to this uncertainty – moving a motion, which passed unanimously at Unite’s Irish Policy Conference. The motion calls on the union to “do whatever it takes to defend jobs and skills at Bombardier” and “fight for the renationalisation of [the] company if that’s the only way to protect our members and defend local communities.”

Unite Regional Co-Ordinating Officer and Socialist Party member Susan Fitzgerald: “The idea of somebody coming in and picking what they want and scrapping the rest is just a recipe for job losses…Shorts was nationalised in the past. If that’s what it takes to secure jobs in communities, we don’t have a problem putting that out there and standing over it.” Support for the demand of nationalisation, has been growing and has been well received by Bombardier workers and the wider community. Bombardier has benefited massively from public investment, yet can sell-off and slash jobs as it pleases. Working-class people are increasingly seeing the contradictions of the ‘free’ market which puts profit before not only the needs of workers and their families but also the planet. Nationalisation is quickly being seen as an alternative to the continuous cycle of job cuts and erosion of hard-won conditions.

Socialists call for Unite to mount a serious campaign for nationalisation of Bombardier as part of a real strategy to defend highly skilled manufacturing jobs. Stemming from any potential industrial action to defend jobs and conditions, tactics that have worked successfully in the past, like the occupation of the plant should be considered. A key demand could be for workers’ control and management of a nationalised aerospace industry that would  prioritise jobs and maintain skills for the benefit of society. This would receive support from across the trade union movement and the working class as a whole – linking struggles from every industry against what is likely to be further attacks on jobs, pay and conditions.