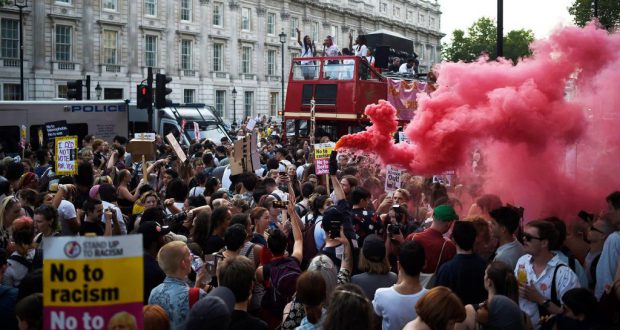 Britain & North: Kick out Boris Johnson & the Tories! Fight for a general election!

Despite his bumbling persona and his populist rhetoric, Johnson is an ideological representative of the super-rich. He campaigned on promises to cut taxes for the wealthy. This is an affront to those barely surviving thanks to Tory ‘welfare’ reform, communities suffering the impact of cuts to services and the millions of workers struggling to make ends meet. He will continue and perhaps even sharpen his predecessors’ attacks on the working class.

The central plank of Johnson’s campaign was to take the UK out of the EU on 31st October, no matter what. He and the Tory Little Englanders don’t give a damn about the threat of a hard border in Ireland and the disruption and instability it could bring. Reliant on the DUP to cling to power, Johnson could also seek to restrict the impact of the historic vote at Westminster – the product of protests and civil disobedience – which will see abortion decriminalised in Northern Ireland if Stormont is not restored by 21st October.

However, Johnson sits atop a profoundly weak and divided Tory party, reflected in his ‘night of the long knives’ cabinet reshuffle. Mass opposition to him is already being demonstrated through youthful protests. The trade union and labour movement in Britain and Northern Ireland should launch an offensive to drive Johnson and his ilk from power, organising coordinated strike action and mass demonstrations against austerity and poverty pay and demanding a general election. Civil servants in Northern Ireland have embarked on an important battle around these issues, which should act as an example for other sections of workers to join them.

Corbyn must go on offensive with socialist policies

Johnson made defeating Corbyn a key battle cry in his campaign, reflecting the fear of the capitalist class of even Corbyn’s modest, social democratic policies. Unfortunately, Corbyn is currently in a weak position, having made concession after concession on Brexit and around the largely manufactured anti-semitism scandal to Labour’s Blairite right, who would rather see the Tories remain in office than a government under his leadership.

Corbyn can win a future general election but, to do so, he must now go on the offensive. He must campaign around a clear, socialist programme of nationalisation, an end to austerity and measures to eliminate poverty through investment in socially useful jobs and services. He must put forward a vision for a socialist Brexit, which would free his government from the shackles of the capitalist EU, its barriers to nationalisation and state investment, while also avoiding hard borders and defending workers’ rights, the environment and migrants.

To achieve this, Corbyn will have to also go on the offensive against the Blairites who are ensconced the Parliamentary Labour Party. He must democratise Labour from top to bottom, allowing the aspirations of the rank-and-file membership to be fully reflected in its upper echelons. Central to this is the question of mandatory reselection, giving local memberships the automatic right to remove sitting MPs who do not reflect their views. This should be urgently implemented in preparation for the next election, to ensure Labour can present a clear and united message and to prevent the Blairites sabotaging a government under Corbyn’s leadership.

Locally, we need an anti-sectarian, socialist alternative to the Tories at Westminster and the Orange and Green Tories here, who bicker about the divisive issues but whose record in power shows they are fundamentally united when it comes to cuts, privatisation and corporate tax cuts. The recent local election showed the growing appetite for such an alternative. The election of Donal O’Cofaigh as a councillor for Cross-Community Labour Alternative in Enniskillen gives a small glimpse of what could be achieved if the trade unions – representing 250,000 workers here – put its weight behind building a new working-class party.