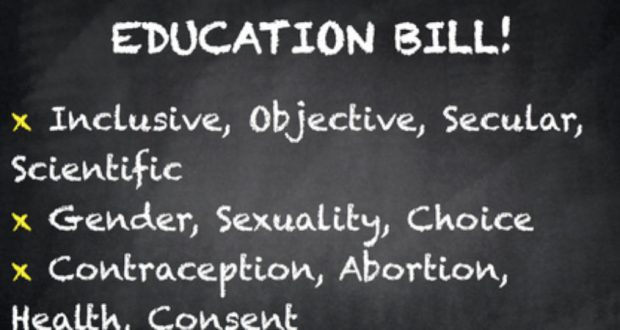 On May 28, parents of children who attend Castleknock Educate Together National School staged a protest at the school’s continuing use of Catholic marriage agency Accord to deliver Relationship and Sexuality Education (RSE) to fifth and sixth class students. Accord was set up in 1962 by Catholic bishops and is clearly biased in their direction.

The school has been using the agency to deliver the RSE programme for a number of years despite the objections of parents. Parents were joined by Socialist Party member and Solidarity TD Ruth Coppinger who said Accord is the wrong agency to deliver sex education classes in the school, in particular to any LGBTQ+ pupils. “This simply shouldn’t be happening, that an Educate Together school is bringing in a Catholic agency to teach RSE – sex education,” she said.

Educate Together (ET) operates a national network of 84 primary and 13 second-level schools catering for 25,000 students, offering schools that are “child-centred in their approach to education, democratically run, with active participation by parents in the daily life of the school.” However ET leave it up to boards of management of individual schools to make sure core values and ethos are adhered to. Most parents choose ET schools so their children aren’t subjected to education which favours one particular religious ethos over another or atheism.

Recent court cases which have been prominent in the media such as the Belfast rape trial and #ThisIsNotConsent, the rise in sexual assaults and physical attacks on young women and LGBTQ+ people, the increase in STI diagnoses, show that a consent-led, objective, inclusive RSE programme is necessary in all schools.

In April 2018 Solidarity tabled a Private Member’s Bill in the Dáil. The Provision of Objective Sex Education Bill 2018 passed the second stage despite objections from Fianna Fáil and conservative independents. The Bill argues for a consent-led, objective, secular, scientific programme that offers non-preaching, non-biased lessons in sexual and reproductive health that are inclusive of gender and sexuality.

The Bill remains at the third stage with the Government cynically using a “money order” (this is when the Government claims there are no resources to fund a bill) in order to block its enactment. Parents, students and teachers’ unions need to put mass pressure on TDs and senators to ensure it is enacted into law.

We need a truly secular education system where the boards of schools are elected from the parents, students and staff as only through the democratic running of schools can we really ensure that every young person is catered for equally, regardless of ethnicity, background, gender, sexuality. There is no place for the Catholic Church in education or healthcare. A full separation of church and state is needed desperately.