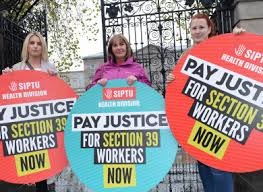 As we go to press, SIPTU have announced 20 June as the day for 24 hour strike by 10,000 non-medical support staff.

Health Support Staff voted by 94% in favour of strike action, while separately 97% of HSE hospital chefs also voted in favour of strike action. Porters, healthcare assistants, cleaners, laboratory aides, surgical instrument technicians, etc have been faced with government inaction on the result of an official review of the work of 6,000 non-medical support staff under a job evaluation scheme set up as part of the 2015 Lansdowne Road Public Service Agreement. So far, the HSE and the Department of Public Expenditure have failed to observe their obligation to acknowledge pay increases ranging from €1,600 to €3,200.

Hospital workers in recent years have faced huge increases in paperwork, higher workloads, and an increase in technical and computer skills requirements, all of which have been recognised by the official review. For example, hospital chefs who have obtained qualifications and must consistently meet standards of ever-changing workplace inspections are seeking a craft worker grade. One Healthcare Assistant from the Dublin area said that a ‘Cold War’ situation existed between SIPTU members and the Dept. of Public Expenditure. “While the HSE hasn’t come out against the job evaluation scheme, Minister Paschal Donohue won’t sign off on it. Unlike the situation with strike action by the INMO there is no dispute here, the work has been done.” A recently retired hospital support worker said “this goes further back than the 2015 Lansdowne Rd agreement, this issue was pushed back as long ago as 2009 due to the financial crisis.” This Fine Gael government flaunts its indifference to workers without whose skills our already floundering healthcare system could very well grind to a halt altogether.