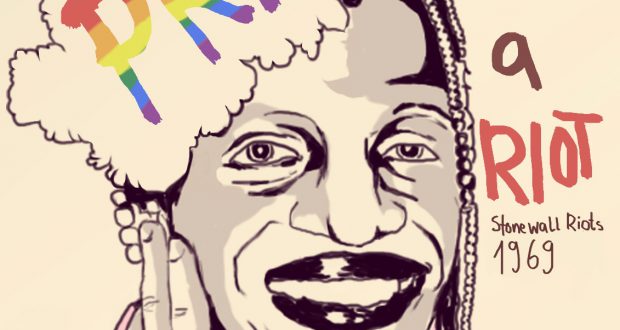 With the commercialisation of Pride, it is important to remember that the modern LGBTQ+ movement started off as a radical, grassroots liberation movement. It has been 50 years since the Stonewall Uprising. This began as a demonstration against a police raid that started during the early morning of June 28, 1969 in the Stonewall Inn in New York City. Gay bars were the only place that was considered safe for the LGBTQ+ community. It was illegal to be gay in 49 states and many trans people were arrested by police for not wearing at least three items of “gender appropriate” clothing.

“I got my civil rights”

Two events that reportedly sparked the uprising were when Stormé DeLarverie was hit over the head by police officers and yelled at the crowd “Why don’t you guys do something?” Marsha P Johnson, a trans woman and drag queen of colour, picked up a shot glass or brick, threw it at a mirror and shouted at the police, “I got my civil rights!” This was the first time the LGBTQ+ community had fought back against police raids and the police had to barricade themselves in the bar after they were hit by bottles, bricks and coins (to symbolise that the police were paid off by the mafia). Many refused to show their IDs as a form of protest.

Stonewall happened during the wider context of other political movements such as the abortion and civil rights movements and resistance against the Vietnam War. Stonewall impacted the broader LGBTQ+ movement by showing that solidarity and disobedience could be used against police raids. Marsha P Johnson co-founded the Gay Liberation Front and Street Transvestite Action Revolutionaries (STAR). Johnson and Sylvia Rivera fought for LGBTQ+ rights, meaning not just formal legal equality, but full queer liberation. The name Gay Liberation Front (GLF) was clearly inspired by the emerging anti-colonial movements in Vietnam and Algeria. Their demands included freedom for the most marginalised parts of the LGBTQ+ community, including the right to self-determination, free education, healthcare and social services for all. Due to their radical politics, they were pushed out from the mainstream LGBTQ+ rights movement who focused mostly on gaining rights for gay men and women within framework of the existing capitalist system.

Capitalism has a way of co-opting movements from the people they oppress the most. Budweiser has recently come out with LGBTQ+ themed beer cups despite the fact the levels of alcoholism within the queer community are higher than the general population. The likes of Caitlyn Jenner and Leo Varadkar don’t represent the growing radicalisation of the queer community, particularly amongst its working class and young section. Marriage Equality and Gender Recognition were won through grassroots movements from below, but these achievements haven’t given the queer community true equality. Trans people face high rates of violence and job discrimination which the trade union movement must organise against. Fifty years after Stonewall, Rainbow Capitalism hasn’t given the queer community the freedom many had fought for in the past. Queer liberation will never be achieved under capitalism; what we need is a new socialist society that puts queer people’s needs above the profit motive that drives their oppression and fosters a real sense of human solidarity. The building of a united working-class movement that unites all workers and the oppressed will be key to achieving this.