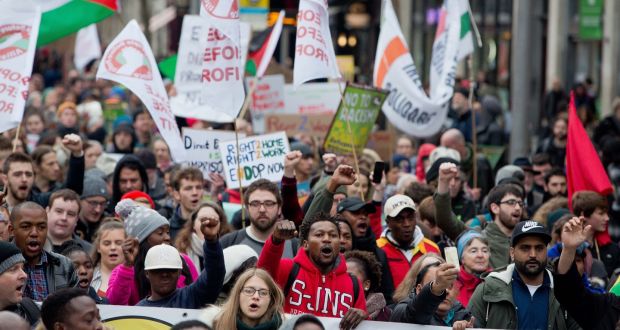 Recent documents leaked from the Department of Justice exposed the rotten politics at the heart of the continued Direct Provision (DP) Asylum system. Despite minor reforms it remains one of the most restrictive in Europe.

Officials claimed a recommended doubling of the weekly payment to asylum seekers from €21.60 to €40.85 would create the “most generous” system in EU. This is categorically untrue. In addition, for most of those in DP access to work is a major logistical barrier.

The European Commission against Racism and Intolerance (ECRI), an establishment body known for its conservatism which monitors racism, has criticised the racist practices of the Irish State when it comes to the provision of homes. This is particularly true of asylum seekers and members of the Traveller community.

In the context of a rise in violent hate crimes against migrants, the DP system is a graphic illustration of institutional state racism. Its purpose is to divide communities and prevent solidarity between asylum seekers and the public, who may organize to resist brutal deportations.

A poll taken in November 2018 showed 70% of those surveyed would be in favour of birthplace citizenship rights, which were removed in 2004 via a referendum. A movement to challenge racism and bigotry in all its forms must reject the privatised Direct Provision system and seek a reversal of the 2004 attack on citizenship rights.

€1.2 billion has been paid since 2018 to businesses to provide substandard housing and care, making asylum a commodity to profit from rather than a basic democratic right to uphold. With the inevitable attempt to squeeze every cent of profit from state funding they can, DP centres have seen conditions and supports deteriorate.

The Oireachtas Justice Committee heard last month that women who experienced sexual violence and trafficking had been asked to leave centres after 60 days. Quoted in The Examiner, Brian Killoran of the Immigrant Council of Ireland stated that the 60 days “were the upper limit of their responsibility to supporting victims of trafficking.” Additionally, no separate facilities are available for victims of sexual violence and many centres provide no counselling or supports.

The existence of a system that upholds terrible inequality to facilitate profit of private business is a disgrace and must be abolished now. We need investment in public housing, health and education to meet the needs of all. We need to combat the divide-and-rule politics which protects capitalism’s interests and which cuts across the potential for a united movement of all working class and oppressed people in our society.