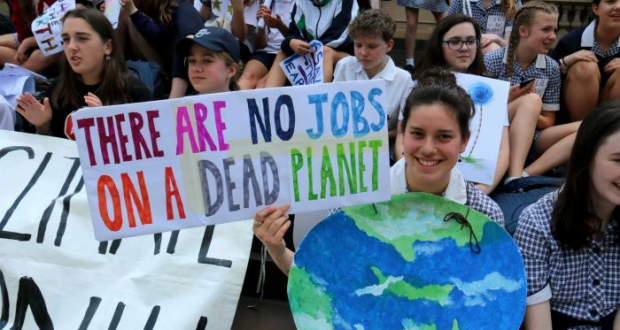 Climate catastrophe: Why you must be red to be green

The first half of 2019 has been characterised by the eruption of a huge movement around climate change, sparked by protests and walkouts of millions of school students internationally, writes Monika Janas. This reflects the growing understanding of the peril which our planet is in and the need for urgent and radical action to reverse this.

In reality the term “climate change” is an understatement of what is happening to our planet — we are now faced with a climate catastrophe. Erratic and abnormal weather is becoming normalised.

As we go to print, India is entering the second week of a heatwave that has seen temperatures sore to 50 degrees celsius. Life in many cities has ground to a halt, with millions unable to leave their homes at day because of the devastating heat. Since 2004, the country has experienced 11 of its 15 hottest summers since records began.

Profit: the root of the problem

The UN’s climate report of October 2018 concluded that we have just 12 years to limit the impact of climate change, before the planet is plunged into environmental chaos, reaching a point from which we can’t return. So it’s clear; something’s got to give.

The decisive question is posed, what is needed to save the planet?

Simple regulations won’t do. In a world where the richest people can be exposed for vast and blatant international tax dodging — as they were with the Panama papers — and suffer no consequences, introducing taxes and rules is simply not good enough. Capitalists regularly get away with murder, and with their armies of corporate lawyers and lobbyists to defend their profits, they will murder the planet too.

Profit making is, of course, the raison d’etre of capitalism. The bosses will always look for shortcuts to widen the profit margins, regardless of how it affects not only the present but also the world to come. The truth is that the capitalist system is too short-sighted and too unconscionable to deal with a crisis of this scale.

A clear example of this can be seen in the system’s use of planned obsolescence — calculated waste — with the production of goods such as mobile phones and computers. These products are consciously designed to fall apart, or to last just long enough to cover the insurance. This in turn results in the extraction and use of more and more rare earth metals and chemicals, which results in the further pollution of waters and the soil. It is estimated that 55 billion tons of “e-waste” is created each year as a result of this process.

This waste ends up in the poorest countries, such as Ghana, where it is then burnt — emitting highly toxic fumes and damaging both the natural environment and the health of those who work and reside there.

The drive for competition between different capitalist companies results in the further waste of resources through duplication. The companies that make up the self care industry, those that produce shampoo, body lotions etc. all compete to produce virtually the same products, and this $500 billion a year industry is completely reliant on the use of plastic.

It is impossible for a system as irrational as capitalism to create a sustainable future. Let’s not forget that it’s just 100 companies that are responsible for 71% of greenhouse gas emissions since 1988.

To organise an economy that is truly environmentally sustainable we must end the private ownership of the planet’s resources and wealth by the major capitalist companies and banks that dominate it. They must nationalized under the democratic working class control, from which a democratically socialist plan of the economy can be constructed based on organising production for the needs of our planet for short term profit.

On the basis of democratic public ownership of the world’s energy companies, we could rapidly transition to renewable energy and genuinely end the use of fossil fuels. A socialist plan of production would include massive investment public transport, making it free and fully accessable; re-tooling and re-skilling the auto industry to build trains, buses and trams rather than gas-guzzling vehicles; ending the unnecessary duplication of goods throughout the economy; and our reliance on plastic that is destroying our seas and eco-system.