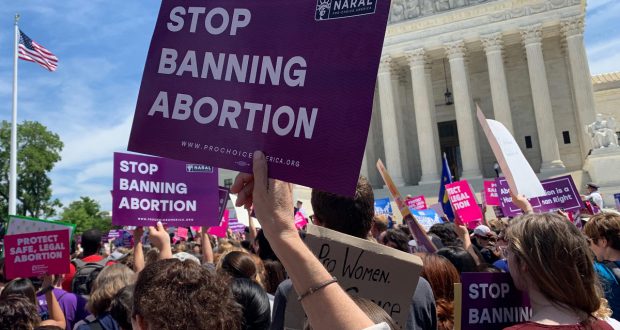 Brutal attack on abortion rights in the US

By Keely Mullen, Socialist Alternative (sister organisation of the Socialist Party in Ireland)

In late May, the Republican-controlled Alabama Legislature passed, and the governor signed, a near complete ban on abortion. This is now the most restrictive state law on abortion in the country since the Roe v. Wade Supreme Court decision in 1973.

This Alabama bill makes abortion illegal at any stage of pregnancy except when the life of the mother is at risk and threatens abortion providers with 99 years in prison. This is just one in a spate of recent state laws which are apparently trying to outdo one another in their barbarism. So-called “heartbeat” bills have been passed in Kentucky, Mississippi, Georgia, and Ohio which ban abortions after a fetal heartbeat can be detected (usually at 6-8 weeks) which is often before the mother even knows she is pregnant.

The Alabama ban, as well as similar bills in the works in other states, directly challenge federal law – which is exactly the intent. The clear goal of the Christian right in pushing these bills is to create pressure on the Supreme Court’s conservative majority to strike down Roe v. Wade.

Divisions on the Right

There are, however, real divisions within the Republican Party on these bills – especially the Alabama bill – and in reality they represent an overreach by hard-liners on the right. Only 14% of Americans support an extreme law like the one in Alabama and two-thirds of Americans oppose rolling back Roe v. Wade. If the Republican Party were to line up behind these extreme abortion bans it would undermine their chances to keep the White House and retake the House of Representatives in 2020. It is for this reason that the chair of the Republican National Committee publicly said she’s opposed to the Alabama law and popular right-wing talking heads like Tomi Lahren have also come out against it for being too restrictive.

The Alabama legislation will very likely be struck down in federal court. The Supreme Court is more likely in the next period to take up bills that restrict abortion rather than outlaw it completely. But there is no room for complacency. Roe v. Wade which was the single most important gain of the women’s movement of the 60s and 70s is in more danger than at any point since 1973. When the Supreme Court does actually hear a case with the potential to effectively overturn these gains there will be mass outrage. Of course, what was won in the 60s and 70s has already been slowly eroded by state laws limiting certain abortion practices, penalizing abortion providers, etc. To win this historic fight to hold on to – and expand – the gains of Roe v. Wade we must begin building the movement now to defend and extend abortion rights.

There has been a growing fightback by women in the U.S. in the past five years. Women have participated in demonstrations against Trump in enormous numbers. There has been a huge politicization around the issue of sexual harassment thanks to #MeToo.

While there is broad anger about the anti-women legislation in Alabama, Georgia, and other states, and real fear about their implications, we have not yet seen mass protests against them. There have been small rallies throughout the country, but not much else. Unfortunately, responsibility for this lies primarily at the feet of the major women’s organizations like NOW, NARAL, and Planned Parenthood who, despite their significant profile, have not made serious efforts to launch a coordinated fightback.

The Democratic Party leadership has played an abysmal role in protecting abortion rights. Nancy Pelosi has said that Democrats do not have to “toe the party line” on abortion. Some Democrats have clearly taken this free pass to heart. Louisiana Democratic Party Governor John Bel Edwards is prepared to sign a fetal heartbeat bill into law any day now. This shows the need for a new party that will unapologetically and consistently fight for women’s rights.

In the absence of fighting leadership coming from the traditional women’s organizations or the Democratic Party establishment, new forces will need to step forward to help lead a fightback – potentially leading to the creation of new women’s organizations. Lessons should also be drawn from the historic victories on abortion rights internationally in recent years especially in the repeal of anti-abortion laws in Ireland that were just as horrific as the Alabama law.

Women have not only been at the center of the fight back against Trump, but have crucially made up a large part of recent strikes of teachers, nurses, and hotel workers. The unions should join the struggle for free, legal, and safe abortion on demand as part of a broader fight for free health care. Bernie Sanders has said that his Medicare for All proposal would include full, free reproductive care which would be a tremendous step forward. The unions can use their substantial social weight to fight alongside women’s organization for this demand as well as demands for free, universal childcare and paid parental leave to give working families real choice. Being forced to carry an unwanted pregnancy to term can have devastating consequences for poor and working class women, making the role of the organized working class essential in this struggle.

There’s no question that a new women’s movement is emerging and these recent attacks can serve as inspiration for that movement to organize itself and develop a new, fighting leadership. While these new laws will almost certainly be struck down, decisive threats to Roe v. Wade are on the horizon and we need to rapidly build the forces now to defeat those attacks when they come. Socialist Alternative is fighting to build the socialist feminist wing of the women’s movement which orients to working class women and points to the interconnection of the struggle for women’s liberation and ending capitalism.