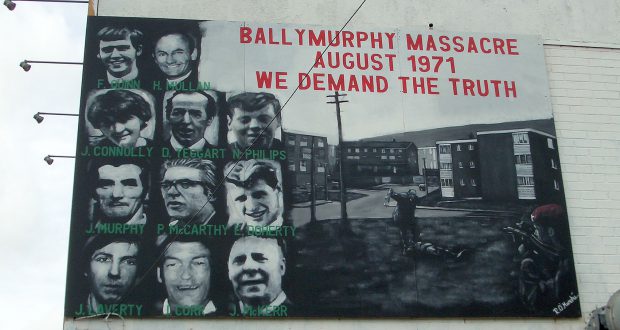 Six months before Bloody Sunday – when the infamous Parachute Regiment (Paras) killed 14 unarmed protesters at a civil rights march in Derry – eleven people were killed in Ballymurphy by the same regiment. For over 48 years, the families of these victims have been denied justice by the British state. Now, an inquest is finally highlighting the reality of what went on.

What happened in Ballymurphy?

On 9 August 1971, the British government launched Operation Demetrius to introduce internment. That day, six civilians were killed by the Paras. Some of the stories illustrate the brutality involved. Fr Hugh Mullan was shot while going to the aid of a wounded man. Joan Connolly was shot by three soldiers, opposite the army base, and lay injured in a field for several hours before dying. Joseph Murphy was shot and subsequently taken into army custody, where he said he was beaten and shot again. When his body was exhumed in October 2015, a second bullet was discovered in his body, which corroborated his claim. On 10 and 11 August 1971, five more people were shot dead.

A former Para told the inquest that a ‘sweepstake’ was run by his unit to reward soldiers who “got a kill.” The same man has even claimed that a colleague recovered part of the skull of a 28-year-old man killed in the area, Henry Thornton, and used it as an ashtray. A general in charge of operations has confirmed that no soldier was disciplined after the massacre and that no debrief took place. When questioned about this General Mike Jackson, then a Captain responsible for dealing with the media, claimed there was no cover up and that “the British Army don’t do conspiracies.” Yet the main argument put out by Jackson, that the victims were IRA members, has been proved to be false.

The violence inflicted by the Paras on working-class communities was not completely confined to the Catholic population. Two workers were also killed on the Shankill Road in 1972, with the Secretary of State, William Whitelaw, justifying it by blaming “Protestant extremists” indulging in “un-British behaviour.”

Socialists support measures that can provide truth for the victims of the Troubles and their families. We believe a real accounting with the past would be beneficial in providing people a real assessment of the role played by the contending forces during the conflict. However, we have no faith in the sectarian parties or the capitalist state to make this happen.

Dealing with the past

Despite the claims of the British state that it was a neutral arbitrator in the Troubles, the events of Ballymurphy and other actions of the Paras are testament to the reality that, alongside the sectarian paramilitaries, the state was an important actor in the Troubles. Today, the various sectarian parties push their own narrative on this dark period. Yet the contending forces are unable to provide truth or justice for the conflict’s many victims. How can the British state be trusted to provide justice to the victims of massacres by the army, or of state collusion with paramilitaries? How can Sinn Féin be trusted to provide the truth to victims of the IRA? Or the DUP to victims of loyalist violence?

While we can have no faith in the sectarian parties or state to provide the truth, we do have confidence in ordinary working-class people bringing to light the truth and exposing those forces to real scrutiny. This could mean some form of wide-ranging enquiry into the Troubles, which would not be in the hands of the state or establishment parties but made up of respected trade unionists and those with a record of campaigning on these issues from the standpoint of ordinary people, including human rights groups 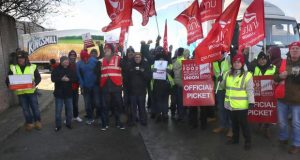