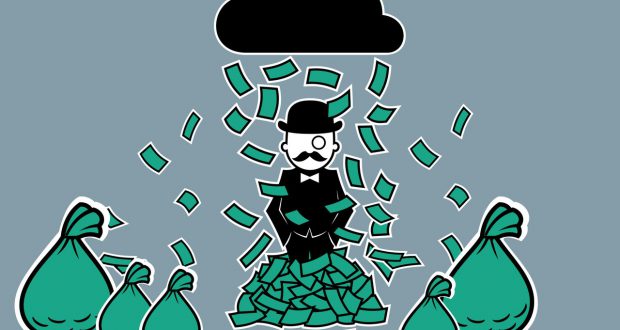 “I’m a capitalist, and even I think capitalism is broken”. This was the message from Ray Dalio, head of the world’s largest hedge fund, in a manifesto in April this year. Dalio is the founder of Bridgewater Associates, with assets of $17 billion, now worried as so many other US executives over growing criticism of capitalism. He also expressed his fear of “some form of revolution”. Many more CEOs made similar statements. Former head of finance company BlackRock, Morris Pearl, is one of those who advocate higher taxes: “Given the choice between pitchforks and taxes, I choose taxes”.

“Capitalism keeps CEOs awake at night,” was the headline when the Financial Times summarized the situation. “Why now, 10 years on from the global financial crisis, after seeing the stock markets and profits hit new highs and with a Republican president cut corporate tax rates and regulations at their urging, America’s leading capitalists sound so uneasy,” FT asked.
“I think there is a real fear that it’s legitimate now to talk about socialists’ and the left’s ideas (…) and the stifling of free market enterprise,” was one of the answers. “What really scares them is when they look at the data showing younger people are increasingly comfortable with socialism as a way of organizing the economy,” Darren Walker at the Ford Foundation, valued at $ 15 billion, answered.
Directors and politicians, including President Trump, are not only concerned about anti-capitalist mood. They fear increased support for socialism. A main article in the capitalists’ most important weekly magazine The Economist in February reported that 51 per cent in the age group 18-29 in the United States have a positive view of socialism. In the President’s annual speech in January – State of the Union – Trump declared that the United States “will never be a socialist country”. And on launching his election campaign for 2020, he said in April: “We are going to war against some socialists”.
The new atmosphere was clearly shown when the chief banks’ managers were questioned by politicians in the House of Representatives. “Are you a socialist or are you a capitalist,” asked Roger Williams, the Republican from Texas, the surprised heads of Citigroup, Goldman Sachs and others. The defendants did not falter in their defense of capitalism, but the remarkable thing is that the question was raised at all.

The new strong opinion from below is a result of the neoliberal politics and capitalist crisis (welfare, social, environment democracy and more). The Economist concludes that this is a growing opinion against inequality, environmental degradation and the elite’s undemocratic rule.
The top executives are at the center of the debate. 40 years ago, a CEO of a large company in the United States earned 30 times more than the median wage of an employee. Today their wages are 254 times greater and every tenth CEO earns 1000 times more!
Capitalism survived the crisis of 2008-09 with the help of new extreme deficits and debt mountains, combined with huge austerity measures for workers and ordinary people. Capitalists and large companies were “stimulated” with even greater profits than before. The “weaknesses in the system” that was supposed to be rectified have instead worsened and the capability to respond to a new crisis has deteriorated.
The working class was taken by surprise by the crisis and the union leaders in country by country were totally incapable of organizing an effective fight against austerity policies. A new space for advancing left-wing politics developed. Behind the US directors concern is their knowledge of the strong support for Bernie Sander’s campaigns against Wall Street and its politicians. Already in the last election he got more votes among young people than Trump and Hillary Clinton together.

The fact that Sanders calls himself a socialist, refuse to take money from big business and stand for healthcare and free education for all is an important factor behind the increased interest in socialism in the United States. His successes mean that more Democratis party politicians are trying to follow in his footsteps, like Alexandria Ocasio-Cortez. The organization DSA (Democratic Socialists of America) has grown very rapidly and also won seats in the Chicago City Council.
The Economist, in their articles, urges liberals to oppose the socialist upswing. The journal’s objections, for example that the capitalists will go elsewhere if the taxes are raised, show that even good reform proposals have loopholes and are inadequate. This was also pointed out by the super-rich trio Bill Gates, Charlie Munger, and Warren Buffett in a television interview on socialism recently. Gates actually said that the proposals from Sanders and Ocasio-Cortez are not socialism, but “capitalism with some level of taxation”. The development in Sweden – from a a model of progressive reforms to counter-reforms – underlines that if the power and ownership of the capitalists are not challenged and replaced by democratic socialism, then they will strike back with privatisations, increased inequality and decayed welfare.
The new socialist currents are a sign of freshness, but they need to be developed. To save the climate and stop the growing gaps in all areas (housing, wages, care, education), large corporations and banks must be taken over in public ownership and under democratic control, capitalism be replaced by democratic socialism. The fact that today’s newly awakened socialist interest can lead to such a development is what frightens the CEOs.

And the dictatorship in China

It is not only in the United States that a layer of young people is seeking socialist ideas and support struggles. In China, the rulers are at least as worried as the US bosses.
The regime over the past year has increased its repression against young Marxists. Young people are in prison, websites have been closed sown and study groups at universities have been banned.
The repression is specifically aimed at worker activists and those who provide them support, as well as feminists and environmentalists.
After the notable strike on Jasic Technology in Shenzen last year, where workers demanded the right to organise a trade union, workers were beaten, fired and arrested. Also many people who participated in the support work were arrested, and several months later some 50 were still imprisoned.
In many media they are called Maoists, but it is a superficial description of the students and other young people in China, who state the great inequality and slave-like conditions in the factories as reasons for becoming active Marxists. None of them see China as a socialist or communist country.
As in the United States, radicalisation is still in its beginning, and is being increased by new struggles but in China also by the severe repression. The arrests and enforced “confessions” are reported and condemned on social media.