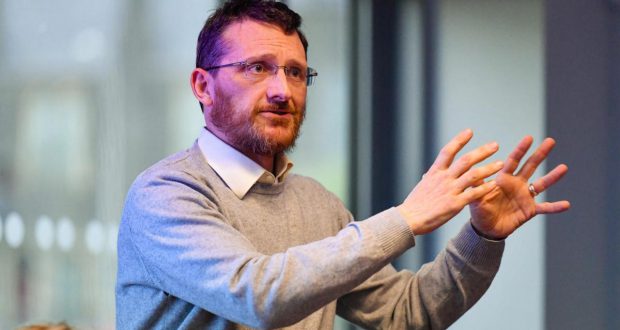 “For me, this is not a personal victory but a political one – it is a victory for cross-community, socialist politics. It reflects a growing opposition to the sectarian games, cuts and backward social policies of the main parties.”
These were the words of Socialist Party member Donal O’Cofaigh after he was elected as a Cross-Community Labour Alternative (CCLA) councillor for the Enniskillen area, having won 720 first-preference votes, almost 10% of the total. In the political context of Northern Ireland, this is an important electoral breakthrough.

was hard won, reflecting years of work. Socialist Party members have contested four consecutive local elections in Enniskillen. Donal himself has developed an impressive track record as a fighter for public services and working-class people. A leading trade union activist, he has been central to successful campaigns against poverty pay and to defend health and education services. He also led the movement which pushed back the toxic fracking industry in Fermanagh.
A number of issues were central to the campaign. A renewed threat to the local stroke unit emerged, thanks to a review initiated by Sinn Féin leader Michelle O’Neill when she was Health Minister. It was revealed that Enniskillen’s food bank was supporting the equivalent of one in five people in the town, a direct result of the Tory welfare cuts voted through by the DUP, Sinn Féin and Alliance. Opposition to sectarian division was also a key message, something which resonated deeply in the wake of the tragic killing of journalist Lyra McKee in Derry. On all of these issues, the campaign put forward a fighting strategy and a concrete, socialist alternative.

The most energetic and political campaign in the area

Donal’s campaign was universally recognised as the most energetic and political in the area. Hundreds of posters were put up, alongside four banners on the key issues. Five thousand doors were knocked, some twice. Every household received multiple leaflets. Given that Alliance and the Green Party didn’t fight ground campaigns, Donal’s was also unique in that it went into every community across the area, Protestant and Catholic. This was reflected in the results, drawing transfer votes from both Unionist and nationalist parties.
Donal will, of course, play a full role in the Council chamber, holding the main parties to account and putting forward a socialist position. However, one of the most important uses of this elected position will be as a platform to assist working-class people to organise in defence of jobs, public services, rights and the environment.
An example of how the council position can be used in this way was seen immediately after the election, with the announcement that fracking again threatens Fermanagh. Donal was featured heavily in the media, calling for cross-community mobilisation to again defeat this menace.
In the Lisnasharragh area of Belfast, Amy Ferguson also stood for CCLA. Amy is a member of the Socialist Party and the Secretary of Unite’s Belfast Hospitality branch, leading vital efforts to organise workers in that low-paid and precarious industry. She has also been heavily active in campaigning for LGBT+ equality and abortion rights.
Amy won 160 first-preference votes, a very credible result for a first-time candidate, particularly given the focus on the Enniskillen campaign and the surge towards Alliance and the Greens in the area. This is a solid basis upon which to build a base for socialist politics in east and south Belfast.
CCLA was launched as an electoral banner in 2016 by the Socialist Party in order to tap into the enthusiasm for the left, anti-austerity policies of Jeremy Corbyn, but also to repopularise the idea of the broad labour movement as the alternative to the politics of sectarian division. Crucially, we wanted to build a socialist voice which – unlike others on the left –  puts forward an independent, working-class position on the thorny issues relating to sectarianism and the national question, one which does not tailcoat either Unionism or nationalism but which takes into account the genuine fears and aspirations of people in both communities and attempts to unite in a spirit of solidarity, compromise and mutual respect.
While very credible election results have been achieved up to this point, Donal O’Cofaigh’s election in Enniskillen shows that – combined with a consistent, determined and campaigning approach – real success can be achieved on this basis. This victory will have raised the sights of many ordinary people, but particularly of trade union activists. Now, our task is to use this breakthrough to build and broaden the challenge to austerity and sectarianism, in the ballot box, on the streets and in the workplaces.