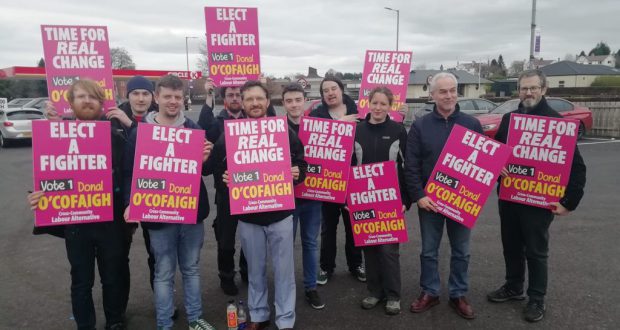 Local elections: Class politics the only answer to sectarian division

The media coverage of Northern Ireland’s local election results has focused on the growth of the vote of the Alliance Party, and to a lesser extent the Green Party. These two parties are said to represent “the middle ground”. The increased vote for these parties is an important development but the headlines represent a partial truth only. A more rounded out analysis is necessary to fully understand the election outcome and to chart a way forward

Over the last twenty years, Sinn Féin and the DUP have consolidated their positions as the two main sectarian parties and the election did not reverse this trend. The DUP emerged as the largest party, gaining 1% on its share of the overall vote, though it lost 8 seats. On the other hand Sinn Féin lost votes, falling back by 0.8%, but remains the second largest party, and managed to come back with the same number of seats.

The two big parties, especially Sinn Féin, have certainly had the wind taken out of their sails and will have some thinking to do. In years gone by, DUP and Sinn Féin strategists would have been concerned that their main competitors, the UUP and SDLP respectively, would have stood to gain from their weakness but both in fact had poor elections. The UUP went from 16.3% to 14.1% of the vote, and lost 13 seats, and the SDLP fell back from 13.5% to 12% and lost 7 seats.

The big winners of the election were Alliance, who increased their number of seats by two-thirds, going from 32 to 53, and secured representation on 10 of the 11 councils. In Belfast, Alliance won two extra seats and topped the polls in several areas. The Greens also did well, going from 4 to 8 seats (their representation in Belfast increased from 1 to 4) and the People Before Profit Alliance went from 1 to 5 seats.

There was an increase in the number of independent councillors elected, including a number who stood on the basis of community campaigns or on an anti-cuts platform. And, very importantly, Socialist Party member Donal O’Cofaigh was elected for Cross-Community Labour Alternative (CCLA) in Enniskillen on an anti-sectarian, socialist platform.

The election results do reflect the fact that many voters are fed up with lack of local government, and the continuation of austerity. The continuing denial of LBGT+ and abortion rights angers young people in particular, but also older workers. The tragic killing of young journalist Lyra McKee by dissident republicans during the campaign reinforced a sense that the sectarian parties have failed and a new way forward must be found.

The DUP won 24.1% of the vote, double the UUP vote. This election marked another remorseless step in the slow decline of the UUP, for 50 years the governing party of the state. The UUP is struggling unsuccessfully to find a way back to relevance. Under its last leader Mike Nesbitt it tacked towards a more liberal form of Unionism with temporary success. This success was quickly reversed, however, and under its current leader Robin Swann it has veered to the right. The result is that more liberal, middle-class Unionists are moving over to the Alliance Party, and more right-wing voters are plumping for the DUP. The UUP are overwhelmingly likely to continue to shrink further, and in time may well merge with the DUP.

The total Unionist vote in the election fell marginally. The TUV and UKIP had poor elections, with UKIP losing all 3 seats they won in 2014 and TUV falling from 13 seats to 6, and it is now represented only on Mid and East Antrim and North Down and Ards Councils. The PUP vote lost one seat overall – although its candidate in Coleraine, linked to reactionary protests against refugees, topped the poll there – and the liberal Unionist party NI21, which contested the last local elections in 2014, has disappeared completely since.

The tendency is for the declining Unionist electorate to coalesce around the DUP. This is not a uniform process and it is clear that the DUP suffered in this election from a lower turnout in Protestant working-class areas, with younger working-class Protestants turned off by their conservative positions on abortion and equal marriage, and by their right-wing, pro-austerity agenda. It shored up its vote, however, by hoovering up votes previously cast for the right-wing of the UUP, and for the TUV and UKIP. The TUV will do much better in the European elections as it is represented in these elections by its only high-profile figure, Jim Allister, but the trend for further consolidation around the DUP is likely to continue.

As far as the battle for the Catholic vote is concerned, the biggest story is the levelling off in Sinn Féin’s vote, despite the mileage it has sought to make over Brexit and a border poll. It is continuing to erode the voter base of the SDLP but its years in the Executive implementing austerity cannot be easily shrugged off now in working-class areas. It has now entirely donned the mantle of green nationalism with little trace of the left-wing rhetoric it once employed, but this is not enough to hold all its vote. A number of independent candidates, some from a dissident republican background, won seats which Sinn Féin would have expected to win in the past.

People Before Profit (PBP) jumped from 1 seat to 5 in the elections. People Before Profit’s success occurred in in Catholic working-class areas in Belfast and Derry. PBP is clearly on the left, but its sharp focus on the question of a border poll further marks it out as a competitor party for the SDLP and Sinn Féin in Catholic areas. It is increasingly referred to in this way by the media. It will almost certainly grow further in the period ahead, but there are severe limitations on its ability to gain Protestant votes, and thus be part of the development of a genuine, cross-community, socialist alternative.

The evidence is that more liberal Protestant voters are shifting to the Alliance Party, unable to stomach the politics of the DUP and UUP. Early analysis of the elections demonstrates that the largest losses by Unionist parties were in councils where the Alliance picked up the most support.  The Alliance Party tended to make larger gains in District Electoral Areas (DEAs) with more voters identifying as British. Its gains were more dramatic on certain councils, particularly Lisburn and Castlereagh, Ards and North Down, Mid and East Antrim, and Antrim and Newtownabbey councils.

One commentator has suggested, “Keeping in mind that the party fared better in DEAs with more non-religious voters and voters identifying as British, this implies that many voters supporting unionist parties in 2014 switched to support the Alliance Party”.

The Alliance Party are now hoping for a strong showing in the European elections on May 24th, and the momentum created by the local elections may deliver on this hope. Alliance is clearly against Brexit. It is also possible that some Unionists who felt comfortable voting for the Alliance Party in elections when the constitutional question is less to the fore may return to the Unionist parties. This will almost certainly be the case at the next Westminster or Assembly elections. Nevertheless, it seems likely that Alliance will consolidate its vote at a higher level than before, and will represent the aspirations of a largely  younger, more middle-class, and more Protestant demographic over the next period.

The Alliance Party do not represent an alternative in any real sense. It is a right wing, pro-austerity party and its main appeal is simply that it is neither Unionist nor nationalist. Their policies deepen the alienation and hopelessness in working-class communities which fan the flames of sectarianism. The increasing votes for the Green Party and PBPA are indications of what is possible. The Greens are genuinely non-sectarian, but like similar parties elsewhere do not put forward a class programme that can offer real solutions to the problems facing working-class people. PBP are on the left, but are adopting positions on issues such as a border poll which firmly place them in one sectarian camp.

What is required is a genuine, anti-sectarian mass party with a socialist programme for real change. CCLA was formed by the Socialist Party and others to demonstrate in practice how such an alternative could come into existence. The intention is to reach the widening layer in society, especially amongst young people, which rejects the sectarian parties. A key audience for CCLA is the layer of workers and young people attracted to the policies and profile of Corbyn’s Labour Party.

The Labour Party is organised in the North but is prevented from contesting elections by the NEC. After Corbyn became Labour Party leader, the membership in the North grew from a few hundred to over 3,000, making it possibly the second largest local party for a time. A golden opportunity was presented to develop a working-class political alternative but this was not seized. Two Labour Party members, Carolyn Wheeler in Fermanagh and Maria Lourenco in Bangor, did stand in the locals as independents and obtained very good votes. If they had been part of a broad and clear labour movement challenge in the elections, the impact could have been very significant.

The election of Donal O’Cofaigh for CCLA in Enniskillen represents a breakthrough for anti-sectarian, working-class politics which illustrates the way forward in the years ahead. It is a breakthrough we intend to build upon. As class struggle comes more to the fore, the lessons of the successful campaign in Enniskillen, and the demonstration in practice of what even one socialist councillor can achieve, will be invaluable. An elected representative can play a vital role in linking up trade union and community campaigns, and drawing together socialist activists, in the struggle to create a mass, working-class party.