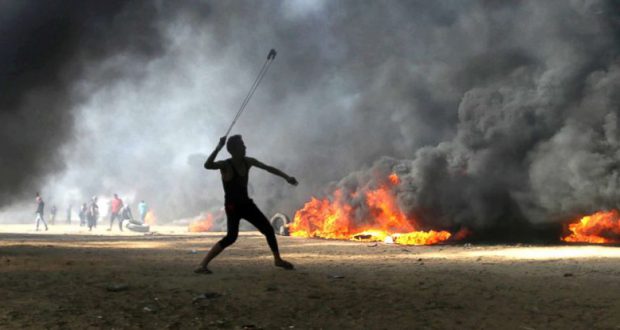 Eurovision and the whitewashing of Israeli occupation

Millions across the world watch the Eurovision every year. This year’s competition, however, will see a significant boycott of what the popular rock band Wolf Alice has called the “most controversial Eurovision Song Contest that’s ever happened.” Artists from across the world have joined trade unionists and Palestinian solidarity activists in calling for a boycott of the event being held in Israel, including the Musicians’ Union of Ireland and the actors’ union, Irish Equity.

In 2012, the Eurovision contest in Azerbaijan also provoked some justified protests against the brutal repressive measures of that dictatorship, which used the contest to advance its international relations. This time, the contest is organized against the backdrop of more significant international attention and solidarity with the Palestinian people, with the pictures from the barbaric Israeli bombing of Gaza hitting international media again and again, including in recent weeks. Thus, the protest against the event is greater this time.

The event is an important PR operation for the warmongering Israeli right-wing government.

On the site of the Eurovision Village, a “Europe Day” celebration was held, with EU diplomats and the Israeli president, Reuven Rivlin, who declared that Israel shares with the EU the “values of democracy, diversity and human rights.” Not that the EU’s record is a good yardstick, but certainly this is the false “pluralist” image the Israeli regime aims to use the Eurovision contest to promote.

This is part of the state-sponsored “Brand Israel strategy” which aims to present “Israel’s prettier face.” The Israeli Prime Minister, Binyamin Netanyahu, went so far as to describe last year’s Eurovision winner, Netta Barzilai, as the Israeli state’s “greatest ambassador.” The whitewashing of the Israeli occupation was seen in the fact that on the evening of 62 Palestinians being killed in Gaza, Barzilai performed a celebratory concert in Tel Aviv, hosted by the mayor. As there was some pressure on her at that day to postpone the celebration, Barzilai said, “We have a reason to be happy, don’t let anybody extinguish [your light].”

After winning, she said, “This is my country, next year in Jerusalem.” This was just months after the provocative move by the Trump administration to open its embassy in the disputed, divided and poor capital. Meanwhile the Palestinians are denied a state and a capital of their own in Jerusalem as well, and the occupation in East Jerusalem continues.

The Eurovision was already held twice in Jerusalem in the past, but this was not seen as so bluntly ignoring the rights of the Palestinians as is the case now.

The approach of demanding the competition be held in Jerusalem was backed up by the Culture Minister, who said that “If it can’t be in Jerusalem – we shouldn’t host it.” But, faced with pressure, the Israeli government has pulled back and now the event will happen in Tel Aviv.

Socialists and the boycott tactics

On every front, the Israeli regime is tightening the screws of occupation and repression; increases in settlement building; escalation of punitive measures against prisoners; more and more arbitrary measures against the Palestinians under occupation particularly in the open air prison of Gaza; and the ‘Nation State Law’ which defines Israel as a state ultimately for its Jewish citizens only. For many trade unionists and activists across the world, boycott tactics have become an important means of showing international solidarity with the Palestinian people.

For the Socialist Party, our starting point is to look to measures which can really assist those in Palestine and in Israel in fighting for a mass struggle of the Palestinian masses and the Israeli working-class against the Israeli regime. We support targeted boycotts of those companies complicit in the occupation, such as those companies that profit from Israeli settlements or are linked to the Israeli military. We believe there should be effective trade union action internationally including blacking of goods to ensure there is a real boycott, as workers did in the past against Apartheid South Africa or the military junta in Chile.

It is also correct and important to expose the complicit role of Western imperialism in backing up their Israeli ally, including the EU. On the other hand, we don’t advocate an approach of a blanket boycott of Israel — something which the Israeli state has effectively used to present opposition to its warmongering as being anti-Semitic.

Given the use of Eurovision as a whitewashing exercise and prestige project by the Israeli state, socialists support a protest boycott of this event.

For us, this is not a protest against the millions who do watch that entertainment event, including ordinary Israeli workers and youth. It is one of several protest measures to help draw attention to the plight of the Palestinians and to the hypocrisy and brutality of the Israeli right-wing regime.

As well as being a racist and militarised regime, Israel is also a class-ridden society were a small number of “tycoon” families at the top control the economy, while 20% of Jewish children live in poverty. Workers have been forced to struggle to defend their jobs, tens of thousands have demonstrated against forced deportations of refugees and tens of thousands have also protested against corruption at the top of government. While many Israelis currently believe the reactionary propaganda of the regime, it is possible to win Israeli workers to sympathise with the plight of the Palestinians, as the history of anti-war protests in Israel has shown.

This is essential in order to have a real solution to conflict, alongside mass movements of the Palestinian people like we saw during the First Intifada. Such mass movements alone have been successful in winning concessions from the Israeli regime. A movement of the Palestinian masses and Israeli workers can provide a democratic, lasting solution for the people of the Middle East. This cannot be done on the basis of capitalism, which means a squabble for resources and, for Palestinians, a history of their aspirations being sold out by the corrupt Arab elite in the region, the United Nations and their own “leaders”, be it the corrupt Fatah or the reactionary Hamas.

It requires a struggle for a different society, a socialist one in which the massive wealth in the region can be under the democratic control of the masses and where workers could come together to find a solution, including the formation of an independent socialist Palestinian state and a socialist and democratic Israel with recognition of the right to return for Palestinian refugees, the sharing of resources, including two capitals in Jerusalem and full protection for all minorities.