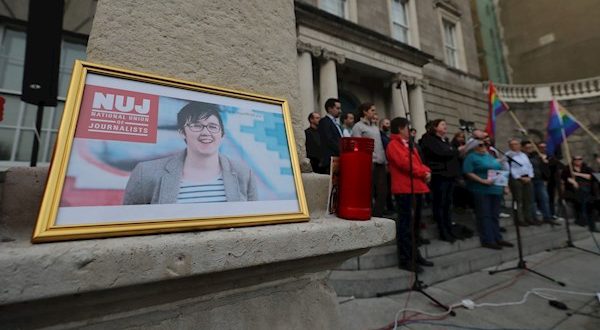 Working class people from across the sectarian divide in Northern Ireland were revulsed by the shooting and death of a young female journalist, Lyra McKee, in Derry city, last Thursday evening. Anton McCabe, National Executive Council member of the National Union of Journalists (personal capacity), and a Socialist Party member, who knew Lyra, helped organise some of the NUJ and other trade union protests against the killing.

The killing of my friend and fellow union member, Lyra McKee, on Thursday 18 April, while out working as a journalist during a riot in Derry city, has touched people in Northern Ireland.

Clashes between police and local youths in the Greggan estate saw republican paramilitary gun attacks on police, in which Lyra was killed.

Within hours of her killing, over 2,000 people had gathered in Derry’s Creggan Estate, close to where Lyra died. On Friday afternoon, over 1,000 attended a protest in Derry called by the city’s trade union council and our local National Union of Journalists (NUJ) branch.

On Saturday, NUJ members and other trade unionists organised protests in Belfast city and the towns of Omagh, Enniskillen, Dungannon, Strabane and Newry. A rank-and-file NUJ member took the initiative in Dungannon.
About 250 attended the rally in Omagh, called at 16 hours’ notice. Some travelled miles: one man had driven 110 miles from Dublin.

While all deaths are tragic, Lyra’s struck a chord because she was an exceptional person. She used her great gifts not just to earn a living, but to make the world a better place. She naturally empathised with the alienated young people who were rioting in Derry on Thursday.

She understood Northern Ireland’s ‘peace process’ has left them out. As a journalist, she documented how that has not delivered for society.

One of her significant pieces of work was on suicide. She pointed out that, since the 1994 paramilitary ceasefires, 4,500 have died by suicide. That is more than died in 25 years of sustained political violence, known as ‘The Troubles’.

The reaction to her death shows there is a huge resistance to going back to the years of violence. Some of the strongest condemnation came from former Republican prisoners.

The ‘New IRA’, which is blamed for the killing, has shown the bankruptcy of physical-force Republicanism. The organisation emits a persistent whiff of criminality, and of senior members being agents of the security forces.
The tribute to Lyra must be to fight for a society which she would be proud of. The poverty and alienation of capitalism, and state repression, which drives young people, in desperation, to riots and paramilitarism, must be answered by trade union struggle for decent jobs, homes and services, for all.

A young gay woman, Lyra, lived in the only part of these islands where she did not have the right to marry the person she loved. That too must change.

In Ireland, Lyra was the third journalist killed in 23 years. Journalists are increasingly menaced internationally. Journalists and trade unionists must draw a line now because a fourth killing can happen.