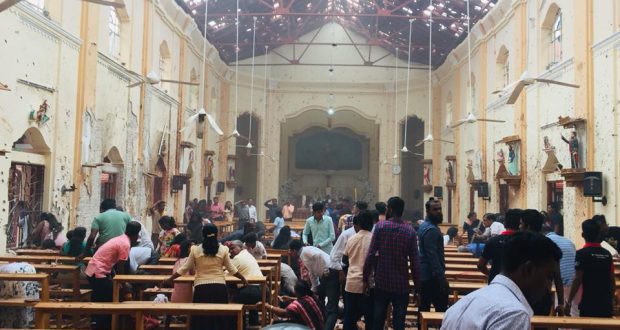 Well-coordinated attacks took place in eight places, including three churches which were filling up for Easter Sunday prayers. Apart from six sites in Colombo, famous churches in Negambo and Batticalo were also targeted. At the time of writing it is estimated that over 300 lives have been lost and over 500 people are injured. The death toll is still expected to rise. Victims of this indiscriminate attack were from all Sri Lanka’s main ethnic and religious groups – speakers of the main languages Tamil and Sinhala, and Muslims, Hindus, Buddhists as well as Christians were affected. British, Chinese, Dutch, Portuguese, and Turkish visitors to the country also died in the attack.

It is still not clear who was behind this. No one has yet claimed responsibility. The Sri Lankan government says that the attacks were made by a “religious extremist”. It is not clear what group or which nationals were behind these mindless attacks. The prime minister has connected the killings with the attack that took place in New Zealand. In this uncertainty fear is gripping the country. The government has banned all social media and declared a national emergency and curfew. The army has deployed on the streets as the government continues to keep the country in a very tense mood.

The choice of places where the attacks took place and the religious extremism indicated by it has shocked all communities. Although mass murder of this nature has never happened in the history of Sri Lanka, violent killings are not new. This year marks the tenth anniversary of the brutal end of the civil war that lasted for three decades. Over 140,000 are said to have perished in the last phase of the war alone.  The current main opposition party, the Sri Lanka Freedom Party (SLFP) and the former president Mahinda Rajapaksa and his family were largely responsible for the genocidal killings of the Tamil minority population during the war with the LTTE (Liberation Tigers of Tamil Eelam) who fought for a separate nation. The Rajapaksa clan had control over much of the state apparatus in the past, including the defence ministry.

Since the end of the war in May 2009, the tension between the main three communities living in Sri Lanka have been whipped up enormously. No concrete measures have been taken to improve the  conditions for the tens of thousands of war victims. Many are still held as political prisoners. No measures have been taken to address the issue of forced disappearances or the release of military-occupied lands. Democratic rights continue to be denied.

The triumphalism unleashed by the Mahinda Rajapaksa family as soon as the war ended has strengthened nationalist Buddhist chauvinism. Although Buddhist extremism has support among only a small minority of the Sinhala majority population on the island it has been consciously promoted by the Mahinda Rajapaksa family. Former defence minister Gotabaya Rajapaksa was directly involved in the establishment of the Bodu Bala Sena (BBS), an openly racist Buddhist monks’ organisation. This organisation singled out the Muslim community. Their hate propaganda has contributed to a number of attacks against the Muslim minority. In addition anti-Muslim feelings have been whipped up, particularly in the Eastern part of Sri Lanka where the majority of Muslims live.

Opening up such divisions is seen as necessary by those who seek to find a route back to power, who have nothing to offer the mass of ordinary people and therefore seek a power base among the right-wing groups and their supporters such as Gotabaya Rajapaksa. Gotabaya set up an organisation called Eliya for this purpose. Leading members of this organisation openly advocate hatred against other communities, particularly against the Tamil-speaking Muslims.

The expulsion of all Muslims from the north by the LTTE in the 1990s opened up wide divisions between the northern-based mainly Hindu Tamils and Muslims. The wounds inflicted during this experience are still not fully healed. Ever since the 1915 riots against Muslims, the Muslim community in Sri Lanka has faced attacks from prejudice being whipped up by all sides, and feels marginalised. The resulting isolation and justified fear of attack contributes to a situation where self-appointed leaders have assumed enormous authority as they present themselves as a strong voice for the community. However this separatism has not delivered in terms of improving the living conditions for the majority of Muslims who live in dire poverty.

But such ideas as well as world events had resulted in the emergence of a certain far-right religious radicalism among the Muslim population. However it is only a small minority who subscribe to such ideas, and the majority of the Muslim population object to right-wing political Islamic ideas. It is also well-known in the past that the Sri Lankan government formed paramilitary groups and armed them in order to use them in the war against the LTTE. Over many decades right-wing governments in Sri Lanka have found various forms of religious extremism useful to mobilise such forces and promote inter-community violence and ultimately to maintain their unstable regimes.

It is due to this history that many now suspect some sort of involvement of the defence ministry – or at least the supporters of the former defence minister in these attacks. The senior minister Mano Ganesan admitted that Ministerial Security Division (MSD) officers had been warned a few days ago that suicide bombers were targeting politicians. It is also emerged that many ministers and their families have made preparations to protect themselves from any possible attack that may take place. The Sri Lankan government completely failed to warn the people of this news or make any effort to prevent the attack.

The right-wing forces have already lining up to make political capital out of these horrific killings. While pretending to stand together with all communities and preaching “unity”, they are already propagating hatred. Supporters of Indian Prime Minister Narendra Modi are trying to capitalise on this tragedy by saying this is an attack organised by Pakistani nationals. The well-known right-wing politician Subramaniyam swamy has already called for the return of the Mahinda family to counter ISIS. He also called for a vote for Modi to prevent any such events taking place in India.

Although the Sri Lankan government and all the right-wing parties have made calls for “peace and unity” their supporters and senior personal are already on the rampage spreading hatred. Personnel linked to the Gotabaya Rajapaksa-led organisation Eliya made an audacious effort to contact the leading organisers of Tamil Solidarity and asked them to co-operate against “Islamic terrorism”. They claimed that it’s a foreign intervention. Tamil Solidarity condemns these attacks and will work with any genuine forces to defend the rights of all communities. But when Eliya representatives made the invitation TS pointed out that it is precisely the divisive politics and warmongering of Rajapaksa and his co-thinkers that has fanned the flame of religious and ethnic divide in the country, and rejected the approach.

Widespread fear exists that retaliation may take place against the Muslim minority, particularly by Buddhist extremists. The tension between Tamil and Muslims in the east can also now sharpen. Weak Sri Lankan governments have historically used ethnic and religious division to consolidate and remain in power. Gotabaya Rajapaksa, in particular, is expected to use this incident to bring himself back into prominence, staking a claim as a valid candidate for the next presidential election.

However, in a short period of time working and poor people from all communities have shown the other powerful traditions that exist in Sri Lanka – of solidarity. At the hospital in the predominantly Muslim populated Kalmunai, a huge crowd gathered to give blood donations for the injured victims. This was the case in hospitals in the Tamil-dominated north as well as in the Sinhala-dominated south. Sri Lanka has a very strong history of united struggle. United Socialist Party(USP) stand in that strong tradition and continue to fight to build a united working class struggle to win all democratic rights, including right to religion, freedom of speech and assembly, right to strike, and national rights for Tamils. USP also argue that it is not enough to fight for democratic demands and urge for united struggle to end the capitalist system once and for all, to establish democratic socialist planned economy to end all oppression.

We may never know the truth of who was behind these heinous killings. But we can stand together against the very conditions that provide the breeding ground for the threat of terror attacks. We must unit to fight for better conditions and democratic rights for all. We must oppose all scapegoating and divisive hatred propaganda. It is only the working class and poor masses who pay the price for these terror attacks. The ruling capitalist class always use this as an opportunity to clamp down on our democratic rights and further consolidate their grip on power. While condemning this terror we must also oppose the hypocrisy of the Sri Lankan state which itself is a terror state. United working class action and the building of mass working class organisations, is the only thing that can protect us from future divide and escalation of divisive attacks that may happen in the future.