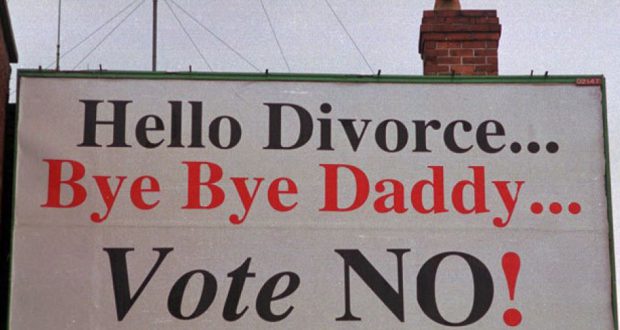 Referendum in May Vote YES – Remove all restrictions on Divorce

“Hello Divorce – Bye Bye Daddy” was a key slogan of the right-wing No campaign seeking to prevent the introduction of divorce in Ireland in 1995. That referendum passed by the narrowest of margins, 0.5%.

It is an indication of the sweeping social change which has taken place, particularly the undermining of the Catholic church, that the new divorce referendum on May 24 is likely to see an overwhelming Yes vote.

If passed, this referendum would remove the restrictions in the Constitution on the availability of divorce, including the provision that the couple must be separated for four of the previous five years. Instead, the government plans to legislate for two years separation.

When originally introduced by Josepha Madigan, a Fine Gael TD, now Minister, as a ‘private members bill’, the proposal for two years of separation was to go into the Constitution itself. Solidarity and Socialist Party TDs argued in the Dáil that there should be no such restriction in the Constitution. Reflecting the change that has taken place, and the experience of the Repeal referendum, the government agreed to remove all restrictions from the Constitution and simply to legislate for it.

We welcome the referendum and will be campaigning for a Yes vote. It is a civil right for those who wish to marry to be able to do so. The necessary corollary for that is that couples should be able to divorce as they wish. It is positive that there will be no restriction in the Constitution, however there should be no legal restrictions whatsoever.

These restrictions in practice will affect the most vulnerable. While in an amicable divorce, a couple could agree to say they were separated longer than they were, in other situations, an abusive former partner could dispute the separation time, and seek to block the divorce.

In order for this legal change to make a real difference for most people, it must be accompanied by economic and social changes which make the right to divorce genuinely accessible. Many women in particular are trapped in marriages, or relationships, that are abusive, or simply unhappy, because without their family home, or their joint income, them and their children could be made homeless.

It is illustrative of the neoliberal nature of Fine Gael, that at the same time that they are proposing liberalisation of divorce laws, they have implemented horrific cuts in refuge services for those fleeing domestic violence! Ireland now has less than a third of the number of spaces it should have according to European guidelines. Only 11 refuge unit spaces are available in Dublin City, and one in three counties across the country have no spaces whatsoever! Similarly, the costs of getting legal advice and representation can be prohibitive in the case of a disputed divorce.

To make the legal right to divorce accessible to all, all legal restrictions on it should be removed. This needs to be combined with the right to free legal advice and representation for all who need it. Inextricably linked to that is the right of people to housing – with proper rent controls and a massive programme of public home building, as well as adequate provision of refuge spaces.