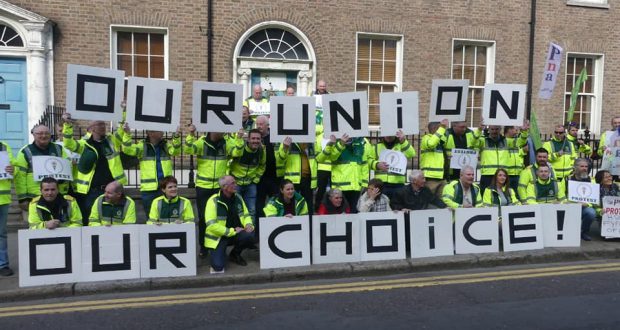 “Our Union, Our Choice”

The current fight for union recognition by workers in the HSE’s National Ambulance Service (NAS) is part of the fallout from the economic crash. The savage attacks on public sector pay during the depths of the austerity years coupled with a harsh regime of overwork and bullying was compounded by the unwillingness of SIPTU officialdom to act on these issues. In these circumstances paramedics resolved to form a union of their own and established NASRA under the umbrella of the Psychiatric Nurses Association (PNA).

The idea of facing a fighting and members-led union was ultimately deemed an unacceptable risk by management in NAS and the HSE, and they acted to de-recognise the union and end the practice of deducting union subscriptions from workers’ pay.

Paramedics efforts to challenge this has been met with a campaign of persecution, with Emergency Medical Technicians especially being victimised and denied the overtime they rely on to make ends meet. Effectively, HSE management are intent on starving the paramedics back to work.

When pushed in the Dáil by Solidarity TD and Socialist Party member Mick Barry, Leo Varadkar disgracefully tried to insinuate that what the workers were requesting was somehow unreasonable. It is not for bosses to decide who should represent workers, but it is consistent with the anti-union views of Varadkar and Fine Gael. When running for leader of Fine Gael, he vowed to make strikes illegal in certain “essential services” if elected Taoiseach.

The effective de-recognition of a union in the public service represents an escalation in Fine Gael’s battle to hold the industrial line on behalf of the capitalist class. With the cost of living rising, workers across the economy are increasingly looking to have the recovery reflected in their pay and conditions. However, the bosses’ recovery in profits is based on driving those pay and conditions into the ground, so they will not want to concede anything.

In addition to this, there are particular obstacles facing the NASRA paramedics from generating the necessary pressure on the HSE and government through their own actions. This is mainly due to the critical nature of their work and contractual regime which obliges them to respond to emergency calls, even when technically on strike. There are ways and means around this, but ultimately the solution lies in obtaining the meaningful solidarity of other workers who have a freer hand to take action which would serve to reinforce and strengthen the actions of the NASRA paramedics.

This should start by the wider PNA membership raising in their struggle with the government for pay justice, a demand for the recognition of their NASRA colleagues. This is not a fight that the wider trade union movement can remain neutral on, there’s too much at stake and a victory would be a triumph for all workers.