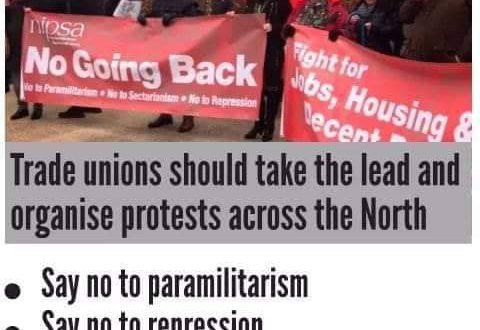 Killing of Lyra McKee: No going back

The killing of Lyra McKee has sent a wave of shock across Derry and the North. Lyra was only 29 but had already made a name for herself as a journalist, an author and an activist. That she was a journalist doing her job has reinforced the senseless nature of this killing.

It is 21 years since the signing of the Good Friday Agreement which was hoped to bring an end to the Troubles. The violence has not ended, and since 1998 over 150 people have died as a result of paramilitary violence in both communities. Nor did the Agreement overcome sectarian division with more “peace walls” today than in 1998. The promised “peace dividend” failed to materialise and poverty and hopelessness are still the rule in the most deprived working-class areas. These conditions have driven some young people in areas like Creggan and the Bogside into the ranks of paramilitary groups. Repressive actions by the PSNI only act as a recruiting sergeant for the paramilitaries.

The trade union movement unites 250,000 Catholic and Protestant workers and is the only body which can now provide the lead which is required. This is an attack on us all and a united, cross-community movement of opposition to paramilitary attacks is the only appropriate response. In August 1972 the Official IRA shot dead Ranger William Best, a British soldier home on leave to Creggan. A crowd of 1,500 women and children protested the next day and one week later the Officials called a ceasefire which marked the effective end of their armed campaign. The New IRA should end their campaign now as should all of the armed groups.

A mass trade union led movement can once and for all end paramilitarism and ensure that a new generation does not waste their lives in prison cells. But this is not enough: the unions must also fight for a better future for all and take the steps necessary to build a united political voice for all working people.