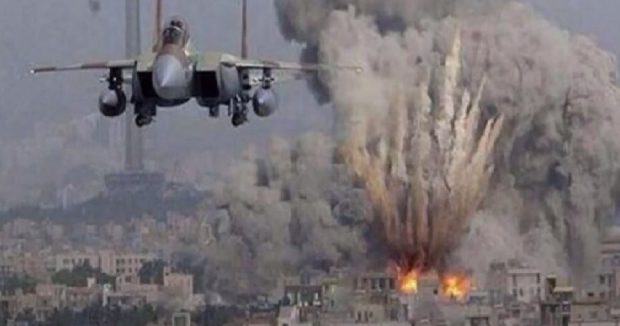 On March 26 and 27, Israel launched air strikes on Gaza. The Gaza Ministry of Public Works estimated that the bombings destroyed 30 housing units, damaged another 500. Hundreds of Palestinians were made homeless by the

attacks and at least five were wounded. Worse casualties were avoided only because many of the targeted areas were evacuated.

The air strikes were ostensibly a response to a rocket attack from Gaza which wounded seven civilians in a town north of Tel Aviv. It is unclear who was responsible for the attack and what the intended target. The Netanyahu government’s claims of ‘self-defence’ ring hollow: Gaza is in reality an open-air prison camp. Its population are the captives of the Israeli state, which controls all entry and exit of people and goods, depriving the population of basic necessities.

A few days later on March 30, Palestinians in Gaza took part in mass protests including a general strike to mark the anniversary of the Israeli massacre of Palestinian protesters the year before. Forty thousand protesters marched to the border and were met with more brutal repression by the Israeli military. Four people were shot dead by the IDF, including three teenagers and more than 40 others were shot.

The real context for all of this is not ‘’security’’ but the Israeli election scheduled for April 9. Netanyahu, facing indictment on corruption charges, is trying to head off a credible challenge from a new ‘’centrist’’ formation led by ex-IDF Generals! This formation offers no alternative to Netanyahu’s policies either toward the Palestinians or on the social and economic issues facing workers within Israel. But, as is often the case in Israeli elections, he is trying to maintain support by drumming up nationalism, chauvinism and fears of terrorism etc.

However, the attacks are part of a broader trend. On every front, the Israeli regime is tightening the screws of occupation and repression; increases in settlement building, escalation of punitive measures against prisoners, more and more arbitrary measures against the Palestinians under occupation and the ‘Nation State Law’ which defines Israel as a state for its Jewish citizens only. They are emboldened in these moves by the attitude in particular of the Trump administration which has moved its embassy to Jerusalem, and now recognised Israeli control over the Golan Heights.

International solidarity is important at this dangerous time. The Irish government is disgracefully holding up the ‘’Occupied Territories Bill’’ which has passed through the Dail and bans Israeli goods produced in the occupied territories. This basic measure should be passed as part of a campaign targeting all companies and state institutions which profit from, or collude in, the occupation or repression against the Palestinians. This should include action by the trade union movement.

The importance of mass struggle

More significant is the question of the protest and resistance of the Palestinians themselves. We have seen an upsurge in protests, in Gaza, the West Bank and East Jerusalem. This points in the direction of what is needed – a new intifada based on mass struggle, led by the Palestinian working class and masses. The entire region is dominated by imperialism and rotten capitalist regimes riddled with corruption and authoritarianism.

A mass struggle against occupation by the Palestinians will not find its support in these regimes but in the workers and poor. The recent uprising in Algeria is an example of the types of explosions which can occur. Such a class based struggle, clearly basing itself on the demand on democratic and national rights for all, could make an appeal to the Israeli Jewish working class who are offered no genuine security by the policies of the Israeli government. A struggle to end the domination of imperialism and capitalism would open the door to a new, socialist society based on real equality and solidarity.