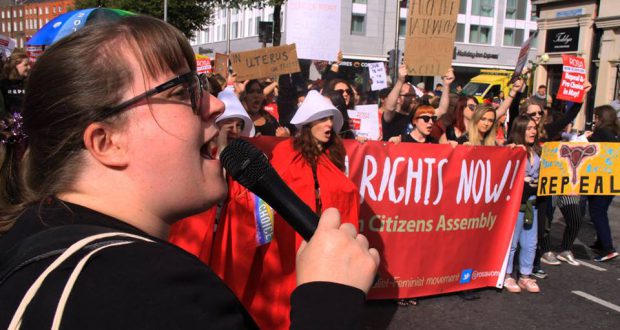 From the housing crisis, to the cervical cancer scandal, to climate change – capitalism’s profit motive clashes with the needs of the majority.

I’m Rita Harrold a 29 year old childminder from Crumlin & a longstanding Socialist Party activist. I’ve been involved in the anti water charges movement, in standing with workers most recently on the nurses and paramedics picket lines, and I was an organiser of ROSA Socialist Feminist movement’s pro choice actions including civil disobedience with the abortion pills that helped win 12 weeks on request.

Workers, women and young people are sick of the raw deal we’ve been dealt and are fighting back!

We won’t be confined to boxes – not tiny flats or rooms in damp house-shares because of exorbitant rents, nor the rigid gender binary and social norms pushed by this system.

We are fighting for a socialist Ireland in a socialist Europe, where the wealth and resources are wrenched from big business and taken into the hands of the working class – in the words of James Connolly “we only want the earth.”