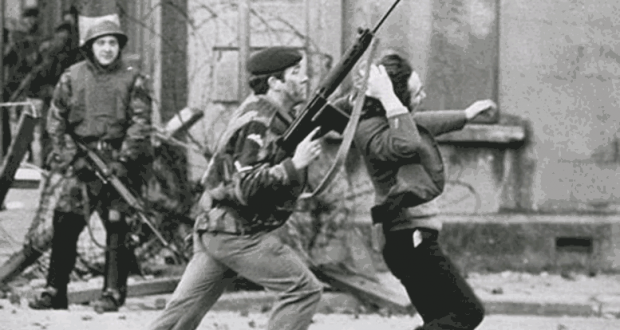 Bloody Sunday: No justice, only insults

The decision by the Director of Public Prosecutions in the North to proceed with the prosecution of just one of the Paratroopers responsible for the murder of 14 unarmed civilian civil rights protesters in Derry during Bloody Sunday in January 1972 has been greeted with justifiable anger by the families of the dead. The Paratroopers are an elite unit of the British army.

This comes nine years after the Saville report, which in the face of incontrovertible evidence, had no alternative but to conclude that the killings were unjustified. This in itself was a victory for the families and the wider community in Derry which had sustained a campaign for justice over the succeeding decades. However, the families and their supporters in Derry rightly sought criminal prosecutions of those responsible arising from the Saville findings.

Role of the top brass

In the aftermath of a PSNI investigation involving the interviewing of Paratroopers the DPP has effectively gone down the route of choosing a token patsy from the ranks of the regiment, an absolute slap in the face for the families. This decision is in keeping with the theme of Saville which sought to downplay roles of the tops of the British military when ample evidence has shown that the killings were pre-meditated and planned by the senior echelons of the army and the Tory government of Edward Heath.

They saw it as necessary to quell the revolt on the Bogside in the period from 1969 onwards. Among those responsible in the higher ranks there is a particular focus on General Sir Mike Jackson who was second in command on the day and who was proven to have doctored/fabricated the statements taken from the paras in the immediate aftermath by his superiors.

Jackson was also responsible for the news management of the aftermath of the Ballymurphy massacre in Belfast the previous August when Paratroopers killed 11 civilians over a three-day period. He went on to be the Chief of Staff in the British Army which can only be interpreted as a ringing endorsement by the establishment for his role in both atrocities. The misfortune of Ballymurphy was that unlike Derry the cameras of the world’s media were not present to capture what was taking place which gave a massive impetus to the campaign for justice.

The British establishment wants to maintain a fiction that Bloody Sunday was an aberration. However, it is indicative of the brutal lengths to which the ruling class and capitalist state is prepared to go when they feel their interests, power and prestige are challenged. This is why exposing the truth behind the machinations of the British State in the North over the course of the Troubles is so important.

As we go to press footage has emerged showing members of the Paratroopers in training in Afghanistan using an image of Jeremy Corbyn as target practice. This clearly shows the contempt that a left leader such as this and the wider labour movement is viewed military brass. A week after Corbyn was elected leader of the Labour Party an unnamed serving general in the British army general said that the army would “stage a mutiny” if he came to power.

Notwithstanding this prosecution being token it will doubtlessly be an enormous focus of attention in Derry and beyond. The events will likely be re-lived again in the courtroom making it all the more obvious the absurdity of bringing this one prosecution against a rank and file soldier when the top brass get off.

The families, similar to the families of the those who died in the Stardust fire in 1981 and in Hillsborough in 1989 are working class people who have been grossly underestimated by an establishment who at the outset assumed would move on with their lives. Judging by the reaction of the families the struggle for justice will not only continue but will be taken up by the younger generations in the city.