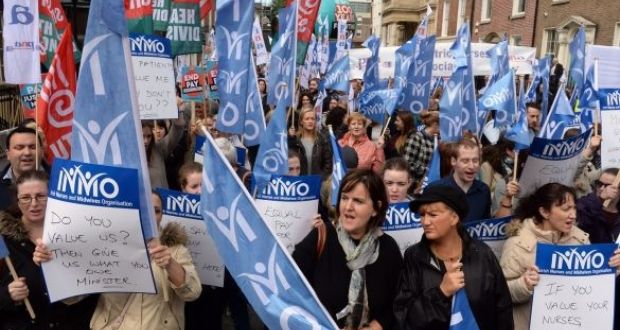 What kind of trade union movement we need

When the nurses and midwives embarked upon their strike action it was clear that they were not just up against the government, the HSE and a right-wing media.

Unfortunately, they effectively found themselves up against the leaderships of other public service trade unions. SIPTU Senior Health Sector official and Labour party councillor Paul Bell was the most blatant example of this when he not only refused to support to the INMO and PNA on national radio but boldly said that SIPTU nurses would work as normal.

However, it was not just FORSA and SIPTU. The leaders of those unions like the INTO and ASTI whose members rejected the very same offer as the nurses late last year were conspicuous by either their silence or by citing their adherence to the Public Service Stability Agreement (PSSA).

The PSSA, due to expire in 2020 is the deal voted on it 2016 that offered very partial restoration of some of what was taken away during the course of the early part of the crisis. There was the public service pension levy in 2009, the across the board pay cuts in 2010, the subsequent lengthening of the working week and cuts to various premia and allowances which taken together all added to a lowering of the rate of pay. To top this off is the lingering injustice of a two tier pay system.

The majority of the trade union leadership in the public sector accepted the fiscal arguments of the government and the Troika at the outset of the crisis resulting in a mere one-day public service strike action in 2010 before telling their members to swallow everything.

This is consistent with their current position which is that the PSSA and deals like it are the best obtainable for their members. They go on to point to the likes of the ASTI whose members were left to fight alone against these deals to reinforce their argument that militant action does not pay. Any successful action clearly undermines their defeatist perspective.

As we go to press it is unclear whether the scene is being set for an immediate push on pay by other workers. In order to contain the pressure, the government and ICTU could try and begin the talks on the terms of a successor to the PSSA earlier than originally scheduled.

However, the initiative should be taken by members and activists. A number of motions are likely to be debated at the other public sector union conferences in the coming months on pay and the cost of living. Union activists arguing for a fighting approach on pay pointing to the nurses and midwives can influence the mood at conference and put the leaders under real pressure. It should be pointed out that it is industrial action and the power of workers that will deliver results.

This needs to be linked with a confidence that there is massive wealth in society being hoarded by the super-rich and big business that can be used to invest in decent wage and public services. There also needs to be a confidence is an alternative to the brutal logic of austerity and capitalism that has resulted in a fundamental undermining of workers’ pay and conditions.

We need to replace the existing union leaders who have consistently shown an unwillingness to oppose this brutal juggernaut. We need a union movement that stands in the fighting, democratic and socialist traditions of its founders, Jim Larkin and James Connolly.