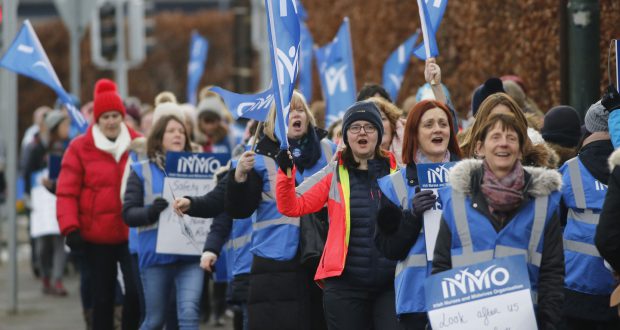 International Women’s Day was established by socialist women as a day of struggle against oppression and exploitation meted out by the capitalist system. A hundred years later, we have won the vote and equal rights by law, but women continue to be at much higher risk of poverty, abuse and harassment than men.

The Women’s Aid helpline answers 50 calls per day disclosing abuse and 90% of women murdered in Ireland knew the man that killed them. In 2018, thousands took part in #IBelieveHer demonstrations against the court system rigged against rape survivors and the explosive #ThisIsNotConsent protests against the victim-blaming of a 17-year old girl. At this protest Ruth Coppinger, TD, and ROSA called for mass walkouts this International Women’s Day.

More than half of all women and nearly two-thirds of women aged 18-24 said they have experienced sexual harassment at work, and the vast majority of incidents go unreported. But the fight against sexual harassment reached new heights in 2018. The #MeToo movement has continued to rage, with low-paid, mainly women of colour working at McDonald’s in the US taking militant strike action, saying “I’m not on the menu.” Google workers took part in a global walk out to protest sexual assaults by senior executives.

The inspirational fight back taking place around the world shows that protests, strikes and walkouts can make real gains for women. By stopping work and demonstrating, workers at Google overturned the ban on taking sexual harassment cases against colleagues to court and forced improvements in reporting practices. But trade unions must take a lead in the #MeToo movement to organise in workplaces.

Since the economic crash, wages have stagnated and woefully precarious work continues to rise, squeezing working class people, particularly women, and offering little security. Women are vastly overrepresented in caregiving and service professions, such as nursing, which are undervalued, criminally underpaid and more precarious. Devastating cuts to the lone parent allowance, the decimation of domestic violence and rape crisis services, and an unprecedented housing crisis all serve to trap women in abusive relationships, risking their lives.

While 760,000 live in poverty, the state refuses to accept the €14 billion in taxes owed by Apple and acts in the interests of big business and property developers. We need public homes on public land, investment to reverse all austerity measures and an end to precarity in the workplace.

Gender equality will not be won by feminising the ruling elite. Theresa May, Regina Doherty and Joan Burton have all been responsible for dishing out brutal cuts that harm working class women and taking away supports that protect women from violence and increase their autonomy. Gender oppression won’t be ended by wealthy women speaking up for us, or through piecemeal reforms that are at risk of being reversed. Equality and liberation can only be won through class struggle, and working-class women have a central role to play in leading the charge against this rotten exploitative system.

The struggle for abortion rights, LGBT rights, affordable housing, decent pay and a future for our planet all represent a struggle against the same thing: the rule of the capitalist system which has inequality inbuilt into its DNA. We need a mass working-class movement that unites all sections of the workers, women, LGBTQ people and all the oppressed, to struggle for a socialist society where its vast wealth is prized from the private ownership of the capitalist elites.

We must stand in solidarity with all the victims of capitalism and oppression globally and with the movements fighting gender-based violence, abortion bans, the gender pay gap and sexism in the Spanish State, Argentina, Brazil, India, the US and elsewhere. We need to organise and mobilise and show the establishment that we refuse to tolerate misogyny, sexism, or oppression, here or anywhere else. Movements uniting all sections of the working class are key to social change – respond to the global call for walkouts and reclaim International Women’s Day as a day for socialist feminism!