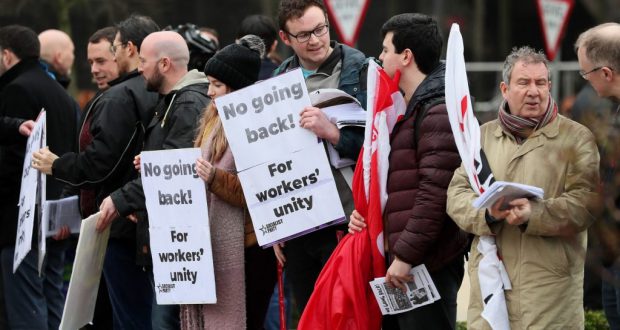 As we go to press, it is over 750 days since the Stormont institutions collapsed in the wake of the RHI. This figure is likely to rise considerably, given the sectarian games of both the DUP and Sinn Féin and the lack of any serious efforts to restart the institutions.

Brexit and the uncertainty about the border have only added to this deadlock. The DUP and Sinn Féin both see Brexit through the prism of their sectarian politics. While the DUP have opposed May’s deal because of the ‘backstop’, Sinn Féin have been among its more ardent supporters. For ordinary Catholics, a hard border between North and South, with all that could entail, would become symbolic of a denial of their national aspirations and would not be accepted in any way. Conversely, any attempt to harden an east-west border – a border in the Irish Sea – would add to the serious concerns many Protestants have that they are being inched ever closer to a united Ireland.

Brexit and the border issue have given rise to more calls from nationalism for a border poll, as seen in the high-profile conference in the Waterfront Hall, involving the main Southern establishment parties (Fianna Fáil and Fine Gael), as well as Sinn Féin and the SDLP. The Socialist Party opposes the politics of both Unionism and Nationalism, which divide the working class. We oppose any attempt to coerce either community into a state they don’t want be part of. We believe only the coming together of working class people around our common interests can lay the basis for a genuinely democratic and lasting solution, which would require a challenge to capitalism and a struggle for socialism.

We believe it is necessary to oppose any move which can create division in the trade union movement, which unites almost 250,000 workers from all backgrounds. This includes the recent initiative by members of Sinn Féin & their supporters in the trade union movement to establish a group named Trade Unionists for a New & United Ireland (TU4UI). Unfortunately, this initiative has been vocally backed by some Southern-based union leaders.

Lessons of past must be learned

Trade unions have acted as an important bulwark against sectarianism, including organising mass protests and strikes, but that unity isn’t automatic and it has been necessary to wage struggles to maintain it in the past. At times, sectarian splits in the labour movement have been posed – for example, with attempts to establish a separate trade union confederation for Northern Ireland, separate from the Irish Congress of Trade Unions. Such a development would have been disastrous for workers and would have enormously strengthened the forces of sectarianism.

These dangers can be posed again if the trade union movement or prominent figures within it are seen to simply ‘pick a side’ in the supposedly binary choice between maintenance of the status quo or a capitalist united Ireland. TU4UI has echoes of the mistakes made by the leaders of the labour movement in Ireland a century ago, when they uncritically supported the agenda advanced by nationalists and republicans, rather than putting forward an independent programme which represented the interests of the working class as a whole. It does nothing to engage with or address the deep-seated opposition of the majority of Protestant workers to a united Ireland and the historical and material reasons for it.

TU4UI intends to organise a conference ironically named “Uniting Ireland, Uniting Workers.” Those who oppose the divisive politics of Green and Orange in the trade unions should come together and organise their own response – one that is about defending the unity of the trade unions and ensuring they play a central role in combating sectarianism of all kinds going forward. Rather than rolling in behind one sectarian bloc, the Socialist Party favours the trade union movement challenging sectarian politics by supporting the building of a new, mass cross-community party of the working class with socialist policies.