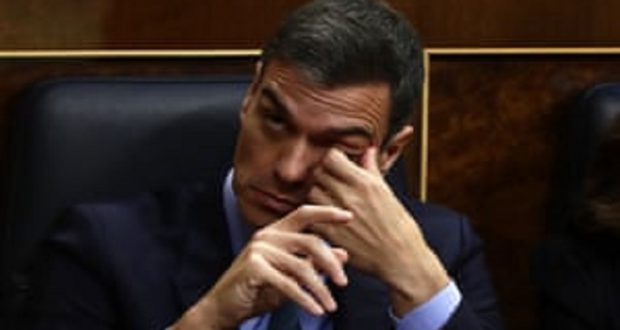 Statement from Executive Committee of Revolutionary Left, (CWI in the Spanish State)

“Defeat the right in the ballot boxes and in the streets!”

Pedro Sanchez’s term is over. A government formed eight months ago after the vote of no confidence against Rajoy, has been brought down by the negative vote in Parliament to the budget proposals. But beyond parliamentary arithmetic, what the premature election shows is the complete instability and discredit that corrodes the regime of 1978 established after the end of the Franco dictatorship. Its most visible expressions are the mass movement for self-determination and a republic in Catalonia, the advance of the extreme right – boosted by the rise of Spanish nationalism and the crisis in the PP – and a social mobilisation that has its roots in the impoverishment of the population and growing inequality and does not stop despite all the attempts of the trade union bureaucracy, social democracy and the Podemos leadership to deactivate it.

Lessons from the past

We are witnessing a great political polarisation, a dominant phenomenon that most analysts cannot ignore. And in these circumstances it is worth reflecting on what happened in the 1930s, pointing out, obviously, that we are not in a situation of open revolution and counter-revolution. However, in order to understand the dynamics and perspectives of the current situation, it is very useful not to forget the lessons of the past.

Today, no matter how much propaganda the supporters of the ’78 regime try to make to contradict this fact, the state apparatus maintains all the authoritarian and reactionary defects inherited from the dictatorship, something that has been highlighted once again in its repressive response in confronting the class struggle. The Bonapartist tendencies of the ’78 regime have been accentuated not only by the activation of the Gagging Law and the trials of leftist activists, trade unionists and artists for fabricated “crimes” that only seeks to deactivate any mobilisation and intimidate fighting organisations. What has happened in Catalonia, with the resounding refusal to recognise the legitimate right of the Catalan people to self-determination, plus the unleashing of an unprecedented repressive, police and judicial barrage and the heightening of the most rabid Spanish nationalism, is the best proof of what we are saying.

In the 1930s, the revolutionary crisis that swept through the Second Republic was marked by different factors, but the most important of all was the inability of the Socialist Party (PSOE), in coalition with the bourgeois republicans, to carry out the social reforms that people longed for. In the context of a profound crisis of Spanish and international capitalism, social democracy failed in its attempt to carry through agrarian reform: the large landowners continued to enjoy absolute power, imposing backwardness and misery on millions of day labourers. Nor was PSOE able to improve the wages and living conditions of workers, nor did it confront the economic sabotage of the bourgeoisie. It renounced separating the Church from the State, and did not put an end to the privileges of the Catholic hierarchy in education and in the economy. It remained subservient to the reactionary elements of the army and the judiciary, and refused to grant Catalonia the right to self-determination and end the colonial occupation of Morocco.

The frustration generated by this political disillusionment fuelled a polarisation and gave rise to seemingly contradictory phenomena. In the first place there was an electoral triumph for the right, with CEDA at its head, in November 1933. Then came the October 1934 workers’ insurrection against the attempt to establish a fascist state by “legal” means. Finally, the breakup of the bourgeois parliamentary regime by the relentless pressure of the class struggle and the Francoist military coup, provoked the revolutionary outburst in republican territory and a civil war that lasted for three years.

Of course, it would be foolish to say that we are facing a similar sequence of events and that they are going to repeat themselves along the same lines. Referring to the past is instructive to understand the objective situation and to be able to explain the causes that lead to this chronic instability and to a social and political polarisation that nothing seems to stop.

The crisis of Spanish capitalism is the material basis that explains all these convulsive political developments. At present, figures show a rapid slowdown in economic growth after years of social catastrophe. More than 9 million workers earn less than €800 a month and, among young people under the age of 25 who work, it is €600 a month; 90% of the contracts signed this year are temporary and precariousness is like an oil slick that does not leave unaffected any sector of production; unemployment affects more than 3.5 million people and the prospect of a new industrial restructuring is just around the corner. The situation is desperate for the majority of the population. Under these conditions it is not possible to expect political stability.

There are more than a few bourgeois, right-wing and social-democratic politicians who yearn for the years of the ‘Transition’ (after Franco). That is not a surprise! The revolutionary situation of the 1970s was frustrated by the capitulation of the leaderships of the left parties – the PCE (‘Communists’) and the PSOE (‘Socialists’) – to the big capitalists and the political apparatus of the dictatorship. But democratic conquests were won thanks to the mass mobilisation of the working class and youth and by the blood of hundreds of fighters murdered by the repressive state forces that enjoyed total impunity. The peculiar “bourgeois democracy” that was created in the heat of that confrontation benefited from the political ebb of the mass movement and from the economic boom of the late 1980s and 1990s, in addition to the substantial aid obtained from the EU. The regime of 1978, assisted by internal and external factors, achieved an alternation in power between social democracy and the right, with more or less stable governments.

The current situation has very little in common with those years. The savage offensive against the economic and trade union rights of the working class, the dismantling of the welfare state, the infamous cuts to education and the public health care system, the lack of opportunities for young people, except for forced economic exile, have created an explosive scenario.

From this drastic change in the objective situation following the great recession of 2008, a social revolt unprecedented since the seventies has emerged:- general strikes, mass movements such as the Green and White Tide, the Marches for Dignity, Gamonal (a famous victorious struggle in the city of Burgos against criminal speculation), the great student strikes, the mass mobilisations for self-determination and a republic in Catalonia, and including the remarkable Women’s Day general strike of 8 March 2018 and the large-scale demonstrations by pensioners.

The escalation of the class struggle and the shift to the left of broad sectors of workers, youth and the impoverished middle class, is what explains a number of important developments – the emergence of Podemos, the election on December 20, 2015 not leading to the formation of a government and having to be repeated on June 26, 2016, or, in order for Rajoy to be sworn in as president, the Spanish bourgeois carrying out a coup within the PSOE to oust Pedro Sánchez.

The most ironic thing is that this far-reaching movement – in which the socialist barons, Felipe Gonzalez and the entire PRISA media squad were involved – failed. Pedro Sanchez was returned as PSOE general secretary, winning against all the odds over Susana Diaz, thanks to the mobilisation of the party’s members.

Defeat the right in the ballot boxes and in the streets! For a fighting left!

Now the situation has taken a new turn. Pedro Sánchez does not have the bad image that Felipe González has among the masses, nor does he appear as a leader integrated with the most established part of the oligarchy. The attacks he has received in recent weeks from the right wing – who have accused him of being a traitor to the homeland and have branded him as the head of a present-day Popular Front (for his pacts with Podemos) – have given him more credibility among sectors of the working class than he deserves. Something similar is happening with his position on Catalonia. Although he has supported the application of article 155 of the Spanish Constitution (which allows the central government to suspend the autonomy of Catalonia) , which firmly denies the right to self-determination and defended the infamous action of the public prosecutor’s office against the imprisoned pro-independence leaders on trial, the right have considered him the main promoter of “separatism”. Are there not similarities between the political hysteria and the behaviour of the reactionary forces in 2019, with their behaviour in the 1930s?

The snap election in April will mean a new escalation in political polarisation. The dilemma presented is evident: either a government of the reactionary bloc of PP, CS and Vox or a possible coalition between PSOE and Podemos with the parliamentary support of Catalan and Basque nationalism. In these circumstances it would be foolhardy to make a definitive prediction of what may come out of April 28.

PSOE has contributed decisively to the demobilisation of the electoral base of the left, with its policy of continuing with cuts and austerity, with its unfulfilled promises and with its acceptance of the logic of capitalism; but also the leaders of Podemos, with their desire to get into government at any cost, abandoning challenging the system and social mobilisation, mimicking the programme and the parliamentary forms of social democracy. But the events in Andalusia and the rise of Vox have had a tremendous impact on the consciousness of millions of workers and young people throughout the State. Following a sure class instinct, right now in the bosom of working families there is a very concrete discussion going on: ‘Can we allow the right to rise and triumph?’.

The answer to this question will be based on the electoral campaign, in a very volatile and changing environment. The failure of the “patriotic Spanish” mobilisation in Madrid on February 10, in which PP, CS and Vox were unable to mobilise their social base in the streets; the great demonstration in favour of the right to self-determination on Saturday, February 16 in Barcelona, with more than half a million participants, which explains the enormous social pressure towards the PDeCAT and ERC leaders and their vote against the budgets; the enormous demonstrations in favour of public health in Galicia and Teruel; the multitudinous demonstrations of pensioners in all the regions, the great taxi strike in Madrid, or what will be a new historic strike day on March 8, which will fill the streets with millions of women and young people from the working class, along with their colleagues – male workers – , will show that the right can be defeated.

On the part of Izquierda Revolucionaria (Revolutionary Left) we will contribute with all our might to this defeat. But we will not do it to hand a blank cheque to Pedro Sánchez or the PSOE, but to underline the idea that voting is not enough. We must defeat the right in the ballot boxes, yes, but to defeat the policies of the right and force the parliamentary left to implement a policy which serves the interests of workers and the oppressed, we need to continue the massive mobilisation in the streets, and build a combative left, with strong roots in the workers’ movement and in the trade unions, among youth and students and in social movements, putting forward a programme of breaking with capitalism, for the right of self-determination and a socialist republic.

There is no time to lose!

To defeat the right in the ballot boxes and in the streets join Izquierda Revolucionaria!