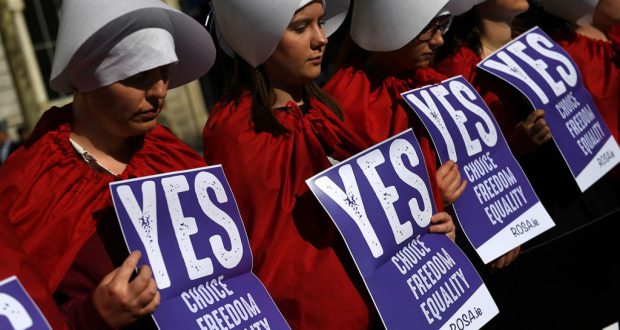 In the referendum in May 2018, the Republic of Ireland saw 66.4% of the people vote Yes to repeal the anti-choice Eighth Amendment, and abortion is now freely available up to 12 weeks into pregnancy. The archaic laws on abortion in Northern Ireland have been found to breach the European Convention on Human Rights. Northern Ireland is a state where a mother is prosecuted for obtaining safe abortion pills for her pregnant 15-year-old daughter; a state where the law could see a person seeking an abortion receive a longer sentence than their rapist; a state that does not allow abortion in cases even of rape or fatal fetal abnormality.

An October 2018 bill that sought to decriminalise abortion in England, Wales and Northern Ireland was supported on its first reading (207 to 117). The passage of this bill would be a huge step forward, although it would not guarantee abortion access here in and of itself.

Northern Irish people are faced with the choice of having to travel to Britain or the South for an abortion or to order abortion pills online and risk being prosecuted. We cannot wait on the Stormont Executive to be re-established and for the politicians to join us in the 21st century to win abortion rights. The DUP and Sinn Féin have a long history of opposing choice. Sinn Féin has only recently changed their position under pressure from below.

Almost two thirds of people polled in the North agreed that abortion should not be criminalised; both Catholic and Protestant communities were in similar levels of agreement in supporting increased access to abortion. We must not allow the campaign for abortion rights to become sectarianised by those who were until recently opposing the right to choose, as this would weaken the struggle.

Just two weeks after abortion services started to be available in the South, a woman has been denied an abortion even though her 12 week scan found fatal fetal abnormalities. She was thus forced to travel to England for an abortion. Meaningful access for all to this healthcare right must be ensured, North and South. The North will not be left behind – we must fight in the streets, the communities and through the trade union movement for our right to choose; our right to laws that uphold our human rights; and our right to safe, accessible and affordable healthcare.