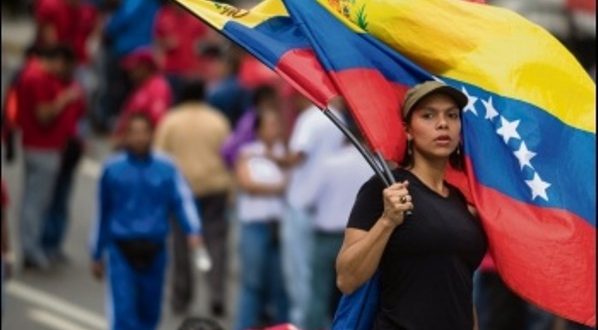 From editorial of the The Socialist, paper of the Socialist Party in England and Wales

The social, political and economic crisis which is currently rocking Venezuela poses crucial questions and lessons for socialists and the international working class.

It is also a stark warning of the threat that will be posed to a Jeremy Corbyn-led Labour government should it attempt to implement a programme of radical reforms without breaking with capitalism.

The forces of international capitalism have rallied behind the declaration of the Venezuelan right-wing opposition leader Juan Guaidó who has declared himself the self-appointed ‘interim’ president. Jeremy Hunt, the butcher of the NHS, also wants an election in Venezuela – but not in Britain!

A coup by Juan Guaidó would mean privatisation, austerity, and even greater repression of workers

US president Trump, Brazilian president Bolsonaro and Argentinian president Macri, along with a host of other right-wing reactionary governments, immediately recognised Guaidó as president. This was clearly part of a pre-planned, coordinated intervention, led by Trump and US imperialism.

They are clearly attempting to carry through a coup and remove incumbent Nicolás Maduro from power. This brazen intervention by Trump was followed by Theresa May in Britain, as well as other European governments, arrogantly demanding that Maduro call fresh elections within eight days.

Even the so-called ‘socialist’-led governments of Spain and Portugal have joined the reactionary pack and are hunting for a ‘regime change’. Social Democratic leaders in coalition with Merkel in Germany – behaving like modern-day Noskes or Scheidemanns (Social Democratic politicians who betrayed workers by supporting World War One) – have also joined these calls.

Trump has “ruled nothing out” and hinted at military intervention if Maduro refuses to step aside. By appointing Elliot Abrams as special envoy to Venezuela, the bloody nature of Trump’s intervention is made clear. Abrams was convicted for his involvement in arming the ‘Contras’ – paramilitary forces in Nicaragua in the 1980s.

Socialists and workers should have no truck with, nor lend any support to, the reactionary attempts at a coup carried out by these right-wing forces of reaction.

Should these forces succeed, the repression and attacks Venezuelan workers and socialists are currently suffering will dramatically worsen. Any right-wing regime coming to power to replace Maduro will enact revenge on the working class and socialists.

The hypocrisy of western imperialism knows no limits. They condemn the Maduro government but have collaborated and supported brutal regimes in Asia, Africa and Latin America. This long list includes Saudi Arabia, Iraq, the military dictatorships in Chile, Argentina, Brazil and elsewhere – to name but a few!

Despite opposing these reactionary attempts to carry through a regime change, socialists cannot put any confidence or complete trust in the Maduro regime.

An economic and social catastrophe is engulfing Venezuela. GDP collapsed by 35% between 2013 and 2017! This is a greater collapse than in the US depression between 1929 and 1933, when it fell by 28%. It is slightly higher than that experienced when the former USSR disintegrated in 1992 and capitalism was restored.

IMF predictions indicate that hyper-inflation will soar to up to 10,000,000% this year, making wages worthless. This is comparable to the economic collapse in the German Weimar Republic between 1921 and 1923.

The economic collapse in Venezuela has resulted in the wiping out of the gains in healthcare, education and other areas that were introduced previously by the Hugo Chávez-led government.

Hunger and starvation have returned, and the social collapse is measured in the soaring crime rate in the major cities. In the largest refugee crisis in Latin American history, an estimated three million people have fled the country – about 10% of the population!

The capitalist class and its political representatives internationally are using this devastating social and economic crisis to claim another ‘failure of socialism’.

Venezuela was used in a ferocious campaign in Spain and Brazil to try and discredit socialism. In Britain, it was raised in the last general election against Jeremy Corbyn and will likely be used in the next to an even greater degree. Corbyn wants to ‘turn London into Caracas’ will probably be the refrain.

Unfortunately, Jeremy Corbyn and most on the socialist left have played into the hands of the ruling class by the uncritical praise they have heaped onto Maduro and the previous governments of Hugo Chávez following his election 1999.

The capitalist commentators who attack Jeremy Corbyn, Owen Jones and socialists for their uncritical defence of the Venezuelan government fail to mention the Socialist Party or our international organisation the Committee for a Workers’ International (CWI). We always supported the reforms and blows struck against capitalism by the Venezuelan working class and Hugo Chávez. Yet we also consistently warned that if capitalism was not defeated, and replaced with a nationalised and democratically planned economy, then the reforms would be attacked and rolled back.

We warned that, without such measures, economic sabotage and dislocation would inevitably develop and allow the counter-revolution to gain ground.

We consistently argued against the top-down, bureaucratic methods used by the regime and the need for a real system of democratic workers’ control and management to be introduced. Only this could combat the corruption and repressive methods that were increasingly a feature of the Chavista regime.

Regretfully, these warnings were ignored by many on the socialist left, who have now provided the ruling class with a weapon to try and discredit socialism.

In Venezuela it is not socialism that has failed but the attempt to introduce reforms in a top-down bureaucratic manner, while remaining within a ‘mixed’ capitalist economy with a significant degree of state intervention.

This is a warning to any future radical left government and a potential Corbyn-led administration in Britain. A radical left reform programme will meet a ferocious resistance from the capitalist class which will act to undermine and sabotage such a government.

It will only be possible to defeat such a campaign by introducing a programme to abolish capitalism and establish a socialist economy, democratically planned, and based on the nationalisation of the major companies and banks which control the economy.

This was never carried through in Venezuela. The current crisis is a consequence of the failure to do this. Had this been carried through in Venezuela at the height of the revolutionary movement which developed following the failed coup against Chávez in 2002, it would have been possible to then establish a voluntary democratic socialist federation together with Cuba, Bolivia and Ecuador.

This would have transformed the situation throughout Latin America and beyond. Tragically the Venezuelan working class is now paying the price for the failure of reformism to conclusively break with capitalism.

It is not certain that the attempted coup backed by Trump will succeed in forcing Maduro from power. Trump and his leading, hawkish national security adviser, John Bolton, who has led the charge for regime change, appear to have failed to secure the first elementary requirement for a successful coup: ensuring the military is on your side!

Thus far it appears that the military high command is remaining with Maduro. In part this is because the military is fully integrated into the regime with senior positions in the government and having secured lucrative business interests from it – especially in the state oil company PDVSA.

Despite the offer of an ‘amnesty’ by Guaidó, many military commanders rightly don’t trust his pledge. They may well remember the ‘amnesty’ offered to the M19 guerrillas in Colombia who laid down their weapons only to be massacred by the Colombian government in the 1980s and 90s.

However, the military support for Maduro could change or fracture and divisions could rapidly open up if it appears that the regime faces the prospect of being swept away or imploding.

Guaidó has been able to mobilise not only the middle class but also sections of the working class and poor who had previously supported Chávez and, until recently, were prepared to ‘give Maduro a chance’.

Now, out of despair and desperation, when an estimated 90% of Venezuelans live in poverty, sections of workers from former Chávez strongholds like the ’23 de Enero’ (a working-class district named after the 23 January uprising against the military regime in 1958) have joined Guaidó protests.

An extremely explosive and unstable situation is unfolding against the background of a social collapse and disintegration. Venezuela could disintegrate and become a ‘failed state’ – an element of which already exists.

Should the army fracture, which is not excluded, Venezuela could be plunged into a civil war and even collapse into a Lebanese type of partition, with Maduro ensconced in the Miraflores presidential palace and in control of some areas and cities, and a Guaidó regime controlling Altimira and other rich parts of Caracas or other cities.

Should the US directly intervene militarily, which cannot be entirely excluded, this will only make a bad situation more catastrophic. Most Venezuelans and the masses of Latin America are opposed to such an intervention. The history of the US imperialist intervention in Latin America is certain to provoke a backlash from big sections of Venezuelan society and across Latin America.

Such a development by the Trump regime will severely aggravate relations between the major global powers – especially Russia and China, both of which are backing Maduro as a means of extending their influence in Latin America.

The Chinese regime has loans totalling £38 billion to Venezuela which it fears losing should the Maduro regime be removed. Maduro has also been one of China’s closest allies in Latin America. The replacement of Maduro by Guaidó would be a set-back for Chinese interests in the region as it would strengthen Venezuela’s links with US imperialism.

This crisis has crucial lessons for the working class internationally. Socialists need to oppose any attempted coup by the right wing and oppose any western imperialist intervention.

Socialists can give no trust or confidence to the Maduro government. In Venezuela, the CWI members in Izquierda Revolucionaria (Revolutionary Left) are heroically fighting for a front of all socialists, dissident Chávistas and workers, to fight for an alternative to the threat of right-wing counter-revolution and for a real socialist alternative based on genuine workers’ democracy.