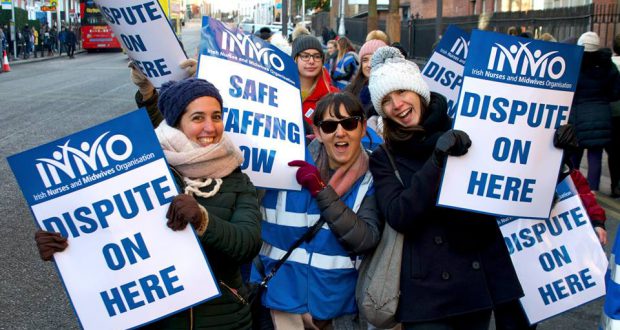 Nurses and Midwives have rightly said enough is enough. Today’s strike action reflects the fact that the justifiable anger against pay restraing, lack of pay parity and dangerous work practices has boiled over.

There is clearly massive support for this action amongst working class people generally. This reflects the growing opposition to wage restraint and outrage at the disgraceful manner in which our health service is drastically underfunded. This support along with industrial action must be used to put massive pressure on the Government.

The Socialist Party fully supports the decision by the INMO to call further industrial action in February and to mobilise for a national demonstration this coming Saturday. Socialist Party members and Solidarity TDs Ruth Coppinger, Paul Murphy and Mick Barry have called for full support for the strike of nurses and midwives.

Nurses and Midwives, and their unions, should feel no obligation to ease up their scheduled action if their terms are not met. Maximum pressure needs to be put on the Government to ensure that a victory is won in this battle. It is only on this basis that they will make concessions in negotiations.

The Government are determined that workers only get a piecemeal increase wages and receive only the spare change of this economic recovery, while property developers, big business and the super- rich amass enormous wealth at our expense.

All sections of the trade union movement should mobilise to ensure that we have tens of thousands of workers on the streets of Dublin on Saturday. ICTU (Irish Congress of Trade Unions) should fully back and mobilise for this demonstration.

This should involve setting up support groups in different workplaces and communities to mobilise people on to the pickets. A victory for the nurses and midwives is a victory for all workers and for a fully funded health service.

All workers deserve a wage rise and we need a break with the current public sector pay deal. This current strike should be the beginning of a wider battle by the trade union movement for pay restoration, an end to two-tier pay and precarity. Only on this basis can workers make real gains. Therefore, linking in with other workers, such as paramedics, who are also taking industrial action, is very important.

Separate church and state! For a secular national healthcare system!

We get wage restraint. They get…

ENOUGH!: WE WANT TO LIVE, NOT JUST EXIST

Hope to see you all there!