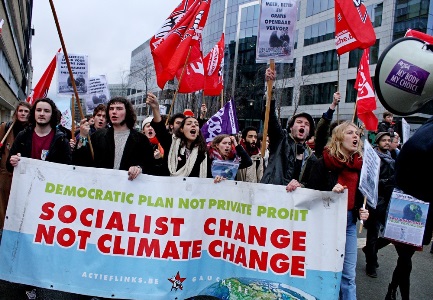 Mass protest can force ministers to leave. After two months of protest, mainly pushed forward by young people, one of the four Belgian ministers responsible for climate had to resign. The Flemish regional minister, Joke Schauvliege, of the Christian-Democrat party, CD&V, announced his resignation on February 5. Earlier blunders by the same minister had been made in the past, but during a mass movement riding out these crises is much more difficult…

The climate struggle is back since the mass demonstration of 2 December last year when up to 100,000 took to the streets just before the Climate Summit in Katowice. The federal climate minister, Marghem (from the francophone liberal party MR), briefly joined the demonstration but then went off to Poland to vote against more ambitious climate targets. In January, we saw a youth movement developing with weekly demonstrations: first 3,000 strong, then 15,000 and one week later 35,000 school students protested in Brussels followed by a new national demonstration with 100,000 the following Sunday. At the end of January, 15,000 were present at the Thursday protest in Brussels, 15,000 in Liège, 3,000 in Leuven and several hundred elsewhere. On 14 February the movement will be joined by students who finish their exams.

Minister Joke Schauvliege (CD&V) has been a minister in the Flemish regional government since 2009. She first was responsible for Environment and Nature. Since 2014 she also became responsible for Agriculture. Schauvliege is known to say strange things. She for example said that “a tree always has had the function to be cut down.” The blunders always “blew over” because Schauvliege had a lot of votes. During mass protests this however becomes impossible. The minister was already the target of a lot of protest messages. ‘What a joke’, the youth wrote on their homemade placards.

The first reaction of the Flemish minister to the protests was to say she felt ‘strengthened’ by the protests. The youth replied laughing. A proposal to introduce ‘climate coaches’ didn’t find any support: the youth understood that these coaches would come from an organisation financed by big business. The proposal of Schauvliege for higher taxes on air travel was an attempt to create division between broader layers of the population and the youth. The bosses’ federation, VBO, immediately joined this attempt with the demand to end automatic indexation of the wages to assure that higher taxes would lead ordinary people to suffer. They want to establish the idea that climate measures are only possible if workers pay for them, especially in the run up to the national strike of 13 February demanding higher wages. The fact that many young people demand measures like free public transport, was not answered by the Minister or the bosses. Finally, the minister came with the proposal to go to the schools to explain her measures. This also didn’t work to stop the movement.

When attempts to coopt and weaken protests don’t work, criminalisation is another tactic. This is what Schauvliege did when she declared in a speech to a farmers’ association that the climate protests are a conspiracy. The minister said that state security had confirmed the existence of such a conspiracy going back to green organisations being angry at farmers’ protest against a Green Party minister in 2003, a moment when most young climate activists who demonstrate today weren’t even born or still very young babies. In an unprecedented way, the state security organisation denied that it had any such information. Minister Schauvliege had to apologize and finally resign. For any future attempt to silence the movement, the minister became a too big obstacle. This resignation was a blow for the Flemish regional government, which contrary to the federal government, remained stable in the past months.

The movement has scored a first victory with the resignation of Schauvliege, even if the struggle has just started. It is not yet a victory which has forced measures against climate change, but it shows that struggle can lead to results. Now we have to go for a real offensive. The appeal for an international school students’ strike on 15 March can play a role in this. The trade unions responding to the dynamic of the youth protests and calling a strike of the entire working class would be especially powerful. That would be the best answer to the politicians and bosses who try to counterpose protecting the climate to the incomes of workers in order to avoid their own responsibility.

The fall of Schauvliege will strengthen the confidence of the movement. The establishment hopes to bring the discussion away from the streets. They hope that the protest will bleed to death and that all sorts of experts, some financed by big business, can take the initiative. Lobbying for a climate law could then be opposed to the street protests. The movement needs to be conscious of this and organise to prepare the next steps: an escalating plan of action and discussion on demands that make a real difference. The unions have a big role to play in this, for example by going in the offensive for free public transport. This sort of demand can unite issues like climate, mobility and the real income of the majority of people.

The contagious youth protests show that determined action in which we do not let ourselves be lulled by half-hearted promises can change the political agenda. With the crisis in the federal government in December, all political attention went on to the migration question. Already the N-VA (Flemish nationalist) party, which had been part of the federal government, wanted to promote the national question in the run up to this May’s general election. The youth protests have made climate a central issue. The national strike of 13 February can add workers’ purchasing power and wages to the list. We would be strongest if we can combine both and unite the enthusiasm of the youth with the economic strength of the labour movement as the basis for a real offensive.