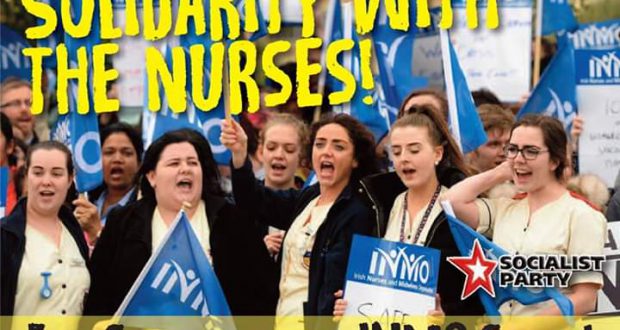 Solidarity with nurses and midwives!

Socialist Party members and Solidarity TDs Ruth Coppinger, Paul Murphy and Mick Barry have called for full support by all workers for nurses and midwives in their upcoming national strikes.

“Nurses should get the full support of all workers and of the general public. Their pay claim is totally just as they’ve suffered a decade of austerity. Rising costs and rents are making  it impossible for nurses and other workers to make a life in Ireland. Fewer staff has put unbearable strain on work conditions for nurses.

Government ministers have made frankly outrageous statements that ‘the country can’t afford’ to give nurses a pay rise. The opposite is the case — the country and our health system can’t afford not to. Their pay claim is absolutely necessary to retain essential and skilled workers in our public health service. It is part of a struggle for a fully funded national public health system that’s free at the point of use and accessible to all.

The same mantra was churned out by governments during the recession. How can they justify the same arguments with the economy showing a budget surplus, record levels of corporation tax and huge wealth being generated at the top of society? This is to say nothing about the savings that could be made in agency nursing fees.

It is manifestly untrue that there is no recruitment and retention problem in the health service. The HSE spent almost €250 million on agency staff in the first nine months of 2018.

The other mantra is that conceding to nurses would lead to knock-on claims in the public service, as if this was something objectionable. Public sector workers provide an essential service to society and deserve a pay rise after more than ten years of pay cuts and increased taxes. There doesn’t seem to be an issue raising the pay of the HSE director to almost €250,000.

Right wing politicians have no problem seeing the salaries of business executives rise relentlessly. Society overall benefits by wage increases to people who actually spend that money in the real economy rather than stashing it on offshore islands.

All nurses and health workers, whether in the INMO or other health unions, should support their colleagues, as it is totally untrue that their is a competition for finite public funds. A win for one group helps others groups. Whether public or private sector, all workers should show solidarity to hasten a victory for nurses  because a win helps all workers, as well as all working class people  who rely on the public health system.

Socialist Party members will be visiting picket lines and supporting the nurses in any way we can.”